You can't say that a certain dog breed is aggressive, because all animals have sort of developed aggressive nature. However, it's true that certain species have aggressive tendencies. However, it all depends on which instincts are more hidden than others. Therefore, training can greatly reduce an animal's violent nature. 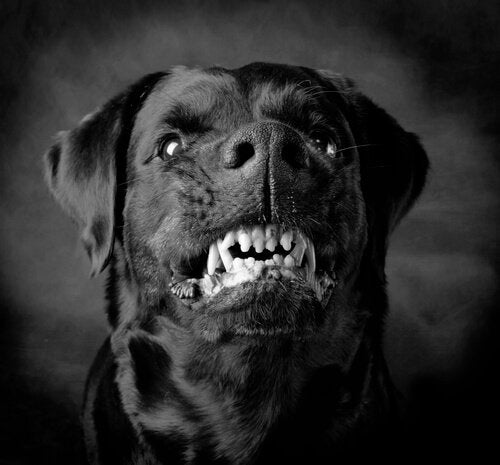 The Rottweiler, Pitbull, and other dog breeds are on the blacklist of potentially dangerous dogs. People say that they have it in their DNA. However, is that really true? Continue reading this article to learn more about this debatable topic: are dogs violet due to instinct or were they trained to be?

Many people believe that these dogs’ aggression is found in their DNA. However, several studies have shown that this isn’t always the main factor. Aggression seems not only to be intrinsic, but also a learned behavior. There are a number of factors that influence this.

It’s true that for years, breeds like the Pitbull or the Rottweiler, among others, have been used for fighting. This has given them a bad reputation, and some owners who get puppies from these breeds only for that reason. Or, many people who adopt them don’t understand that they require special training.

Below, you can find out about the factors that contribute to canine aggression:

Whether or not DNA really influences these so-called potentially dangerous breeds has always been up for debate. It’s true that constant generations of breeding dogs with a violent nature has modified these breeds, and has influenced the Pitbull or Rottweiler to have aggressive tendencies.

Therefore, if you socialize them well when they are puppies, and provide proper training under the supervision of a professional, you can reduce much of this behavior. Thanks to the methods above, you can make the animal an excellent and tame companion, However, you should always take precautions, just in case.

Imprinting is a puppy’s developmental stage with his family, in which he learns to be a stable animal. If this is done incorrectly, and puppies are taken from their families at the wrong moment, these babies may develop mental or behavioral problems.

Childhood for dogs, just like people, is the most important stage of their lives because it is when they acquire and learn habits that will remain for a lifetime.

If the puppies’ mother, or other older dogs around them, have been used in fights and exhibit this behavior in front of the little ones, they will imitate it easily.

Puppies, just like children, are sponges. They can absorb and mimic any attitude. If you don’t prevent any bad behaviors on time, then they can stick to them for their entire lives. However, if you train the puppy properly, you can get rid of this behavior.

Another factor that influences aggression in these breeds is that many people who adopt them don’t understand that these dogs require special training. Since they have witnessed aggression in their surroundings, and they believe themselves to be powerful because of their composition and the strength of their bite, they need to know who the leader of the pack is.

In other words, you have to teach them to listen to and obey your commands. The must understand that you are the only one who’s in charge, and that they are beneath you. If you teach them this when they are puppies, you should not have any problems, although it’s never a bad idea to take precautions. Even if you think you know how to do it, it’s best to go to a professional.

Abuse makes dogs aggressive. You might have adopted an adult dog with this problem, but it can also happen to puppies. Why? Because these breeds usually cost a lot of money, so the only way to get a dog with those characteristics is through a pet store.

Dogs that you can buy in stores come from puppy mills that transport them in unsanitary conditions: small cages in which they can’t move, or large dogs that share the cage with several dogs. The breeder usually doesn’t clean up after the dogs or give them anything to eat or drink during a long trip for several miles.

In fact, of all the dogs that are taken to stores, usually half of them survive, and sometimes even less. All these things can influence a dog’s personality and its aggressive tendencies.

So, let’s try to solve this question: Are dogs violent due to instinct or training? There is no clear answer, because there are several contributing factors. Does instinct influence aggression? Yes. Does training influence aggression? Yes, even more than instinct, but that doesn’t mean you shouldn’t take precautions, because you are responsible for the physical damage that your dog inflicts on other people or pets.

Interesting Articles
Basic Training
What to Do if Your Dog Bites its Leash?