Five Reasons Why Dogs Urinate In The House

There are many reasons why dogs urinate in the house. Next, we'll take a look at the most common ones. 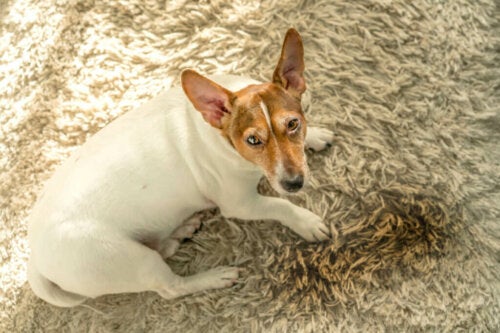 Dogs aren’t toys, which is obvious to any animal lover. As living beings, they eat, cry, sometimes misbehave, and have to relieve themselves. Normally, they use the street or garden as a bathroom when they need to. However, there are certain circumstances when dogs urinate in the house.

Did you know that there are some specific reasons why dogs urinate at home? Also, did you know there are actually some diseases that can lead to this unwanted behavior? Read on to find out about the most common reasons behind this behavior.

Why do dogs urinate in the house?

The root of this behavior is based on three principles:

Following these premises, we’re going to explain the reasons behind this undesirable behavior.

In these cases, the dog isn’t aware of where they have to relieve themselves. Therefore, they urinate or defecate inside the house. In puppies and young animals, it’s a normal problem that resolves itself over time.

However, these dogs, as they grow, learn to control their bowels, and understand that the right place to relieve themselves is outside.

On the other hand, older dogs can also urinate in the house if they’ve never been trained properly. It’s usually an easily resolved issue, although it requires a little more training and effort on the part of the owners to be able to re-educate the animal.

There are several disorders of this type that can cause the appearance of this behavior. For example:

To solve the problem, it’s best to assess the psychological state of the animal and propose an appropriate behavior modification treatment.

Reasons why dogs urinate in the house: Pharmacological treatments

The administration of certain medications can increase urine production or water intake, which leads to an increased need to urinate. As a result, the dog may not be able to wait until their next walk and go inside the house.

Some of the drugs that can lead to this condition are the following:

There are many conditions of the urinary system that can produce a situation where the dogs urinate in the house. Any disorder involving this system, as it’s the main one in charge of regulating the production of urine, can modify its production.

For example, some of the most common diseases are the following:

Reasons why dogs urinate in the house: Hormonal diseases

In addition to the urinary system, the endocrine system is also actively involved in regulating the amount of urine produced. Therefore, endocrine diseases can also be behind this behavior. Some of the most common in dogs are the following:

In conclusion, given the variety and number of reasons that can cause this behavior, we recommend going to the veterinarian to correctly evaluate the cause of your dog urinating at home.

Instead of looking at the wet carpet as a reason for anger, we should interpret it as an indication that the dog’s health might be at risk.

Dog Training Goals and Commands
Basically, the goals of dog training focus on obedience. Thus, the training seeks to have the dog learn how to understand and follow commands properly. Read more »