How to Raise a Friendly Cat

Cats must be socialized at a young age so they can have normal relationships with other animals (people included). If you didn't socialize your cat while they were young then it'll be very difficult to change their behavior as adults --and patience. Read on to find out how to raise a friendly cat. 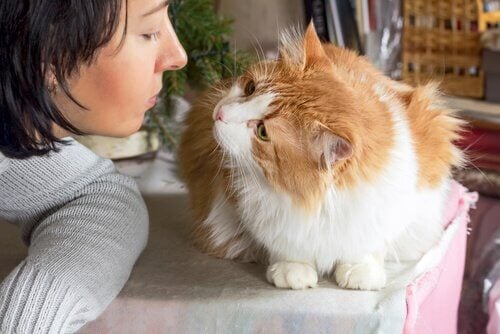 If your kitten is very independent and antisocial, it’s still possible to help them integrate into a human environment and be surrounded by all the animals and humans we hang out with. So how can you raise a friendly cat?

Antisocial cats don’t get cuddly with humans. And if we pick them up they’ll feel anxious, uncomfortable, and even aggressive.

Antisocial behavior is often the result of poor socialization at an early age, although it may also be due to bad habits. Keep in mind that cats are different from dogs and can’t stand rough and tumble play.

Experts say it’s almost impossible to transform a wild cat into an affectionate animal. Unfortunately, felines who have been raised without human company during their first seven weeks of life will never fully accept their humans.

However, antisocial cats may sometimes allow superficial physical interaction. And this is why it’s important to socialize them as soon as possible.

Genetic makeup is another important aspect. There’s a set of genetic predispositions which decide a cat’s temperament. Some of them are independent by nature, and may even turn out to be antisocial despite having been raised around humans.

How to raise a friendly cat?

The first step to raise a friendly cat is to establish some simple routines for the feline to be more sociable and affectionate. For example, feed him frequently and in small quantities. By using this method, your cat won’t have food at his disposal. In this way, he’ll be aware that his meals depend on him being nice to you.

Talking to him and touching him frequently will also improve your relationship with your furry friend and inspire him to be sociable. Join him at his favorite places; incite his curiosity so that he joins you in a game. (Which, by the way, is an ideal way to strengthen emotional ties with a cat.)

It’s important not to invade his territory nor force physical contact. Just let him come to you under the promise of treats and fun. Your patience and care will pay off in the end as his behavior will gradually transform.

In order to raise a friendly cat, the first thing you have to do is help him feel safe in his environment. Furthermore, in addition to providing basic care in terms of food and comfort, you also have to offer him enough affection to strengthen his confidence in you and other people and animals.

However, it’s also true that every cat requires a different level of attention, and that’s why you’ll need a personalized plan of action.

The friendly cat around our guests

When visitors come over, you shouldn’t force your pussycat to be friendly or sociable. However, some felines won’t be able to contain their curiosity and will come around to investigate. But, the normal reaction is for them to be suspicious and hide immediately, especially if the guests make abrupt moves or if there are loud, unruly children.

Let’s not forget that cats’ ears are a lot more sensitive than human ears. For instance, shouting and loud conversations could be torture for them. So, it might be normal even for a friendly cat to hide under such circumstances.

Sometime after your visitors’ arrival, get the cat and bring it along in your arms as you approach the people who are unknown to it. Let it sniff the strangers. And, after closing the door so that the animal can’t leave, put it back down on the floor.

The cat’s first reaction will be to hide or to stand next to a corner in the room; just ignore it at this point.  Soon enough it’ll come out of its hiding spot and approach all the people on its own.

If the cat is still young, and you have enough time, you could take the training further and take your cat out for a walk. You must bear in mind, though, that cats are often quite content to stay at home.

Aggressive Cats: What To Do If Your Cat Is Aggressive
Most people have seen what happens when cats get angry. We'll give you some tips on how to deal with aggressive cats and how to calm them down. Read more »
Link copied!
Interesting Articles
Behavioral Problems
Five Reasons Why Dogs Urinate In The House

Interesting Articles
Mammals
Curiosities and Habits of the Silver Fox

The silver fox is quite appreciated by the fur industry due to its striking colors. This is basically the most…