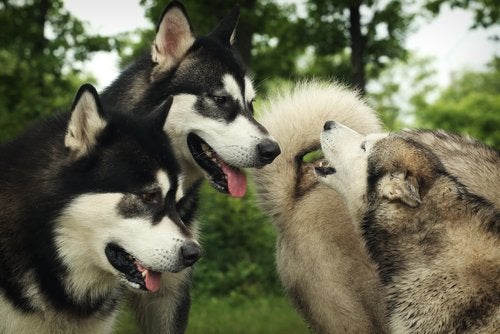 A lot has been said about communication between dogs and humans. Some studies say animals can understand people’s moods, tone of voice and even certain words. On the other hand, pet owners have been learning ways to tame man’s best friend.

Anyways, how do dogs communicate with each other? It’s even more intriguing to understand how our canine friends interact when living under the same roof. Do they have special connection if they’re family members? Perhaps there are many things humans still haven’t discovered about dogs, but there are a few findings on the topic. Below you can see what they are.

Do dogs recognize their family members?

Dogs probably recognize their parents and siblings. However, this depends more on their socialization process more than anything else. In other words, it’s something similar that happens with human beings. For example, would you know if someone is your sibling just by being near him? It would be difficult to do so if you have no information about him.

Something similar happens with these animals. Their ability to recognize kinship depends on living with them during certain stages of life. Therefore, it’s very important for dogs to live with their relatives (either parents or siblings) when they are two to four months old because it’s an important stage of socialization.

When a dog is separated from it’s family at an early age, he may lose awareness of his family members. However, there’s another way for dogs to identify them.

The power of a dog’s sense of smell

Your dog knows when you come home, among other things, just by recognizing your smell. Likewise he also can identify people through his powerful sense of smell. Years can pass and some canines still recognize individuals they have previously met.

It’s important to keep in mind that dogs don’t necessarily recognize family members just by smelling them. No matter what, they can identify anyone they have met before. Obviously, socialization is still a key factor.

Numerous scientists have conducted experiments to see if dogs are capable of facial recognition. Obviously, they can recognize their owners because they have a good memory. However, the question still remains if canines can recognize each other visually.

Recognition and socialization in dogs

Canines being able to recognize others is a matter of life and death. It allows them to distinguish a friend or an enemy. They associate friends with survival, protection and food. Therefore, recognition may have to do with their instincts or survival techniques.

However, canine memory and recognition are limited. In reality, everything seems to depend on a dog’s socialization process, which there is always some kind of risk involved.

Therefore, two domestic dogs getting along under the same roof depend greatly on the owner’s behavior. The first impression dogs have of each other determines everything. Then, what should be avoided? Make sure dogs don’t get jealous of each other and don’t invade each other’s territory.

What about when two dogs are from different breeds?

As you know, dogs recognize each other through smell, chemical agents and gestures. Since this is such a determining factor in a dog’s life, then there really isn’t much difference between  breeds. Therefore, the impressions they have of each other is what really defines if they can get along.

In other words, the breed is not the determining factor, because all dogs belong to the same species. It`s important for owners to interpret their pets’ body language. If you pay attention to their posture and facial expression, you’ll know what dogs will feel upon meeting each other.