Have You Heard About Dog Dancing?

Videos of people dancing with their dogs can now be seen all over the Internet, and some of them have turned into actual shows. But, this isn’t a new thing. ”Dog Dancing" (born in the USA) here’s been around for a few years, a newer trend appreciated by many pet lovers. 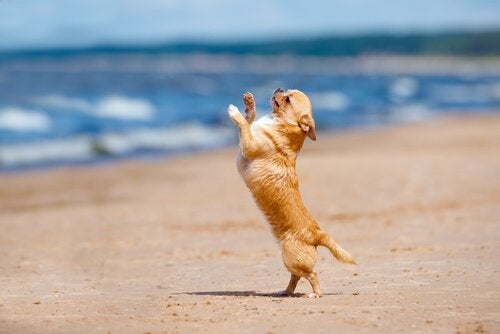 Would you like to know more about Dog Dancing? In this article, we’ll tell you a little bit of what we know about this type of “exercise,” better known in the USA as “Musical Canine Freestyle.” Have you heard about it? Perhaps you’ll even be inspired to try it out with your dog!

The concept of Dog Dancing arises

Although this trend is most popular in Germany, it actually arose in the United States around 1989, when ballet and classical dance were all the rage in the world of entertainment.

What is Dog Dancing?

As you might expect, it’s dog dance, so it’s all about teaching our dog to carry out a specific choreography.

Dog Dancing goes well beyond just grabbing our pal’s front paws and waltzing together. (Although when we hear “dancing with our dog” that’s exactly what comes to mind.) But, rather, it’s all about creating a choreography in which the dog makes certain moves in sync with the rhythm of the music.

The objective here is more than just fun. It aims to make obedience exercises more creative and attractive. Currently, there are national and international Dog Dancing competitions in many places all over the world.

Can all dogs learn to dance?

If you like dancing and are reading this article, then you could be wondering whether your dog could maybe have a boogie with you.

Any dog, as long as it’s not overly aggressive, can learn and practice Dog Dancing. Although the exercises may seem complicated, with patience, perseverance, and good training you’re sure to be able to get your furry pal interested in it.

The most common movements your dog must practice for this form of exercise are:

These are some of the most common moves. However, if you don’t think you’re capable of training your dog alone, there are Dog Dancing schools where they’ll be happy to help you out with it.

Germany, the heart of Dog Dancing

We already know that as far as music is concerned (and when it comes to classical music, in particular) Germany has always set the world precedent. Well, we’re talking about music here and, as you’d expect, Germany is right up there –even though we’re talking here about dancing dogs!

Although it took Germany a while to join the trend (about 7 years after it emerged in the United States), they’ve taken it to heart and have won many contests and prizes since then.

In fact, there are currently 500 people in the country who practice this form of dancing, and the numbers of aficionados continue to increase. According to Tobías Hertel, president of the German dog show, people fall in love with this sport because, “Germans love music, and love and value animals. And if they move, even more so. Dog Dancing is a wonderful fusion of both.”

Just as with X Factor, a television program was created for dogs to demonstrate their shaking prowess: Das Supertalent. A German bitch, by the name of Primadonna, won the contest in 2009. Just another example of the love that Germans have for this sport.

After this, Primadonna and its owner signed a good few contracts. But after trying to keep up with them all, the poor animal had burnout syndrome. Which begs the question: Is Dog Dancing safe? The answer is yes, in moderation. As with everything, avoid excess.

10 Things You Shouldn’t Do if You Respect Dogs
Many times due to lack of knowledge, and even having the best of intentions, we can treat our pet badly. If you want to offer them everything they need and be the best owner in the world, we recommend that you read the following article where we tell you which things you should not do if you respect your dog. Read more »
Link copied!
Interesting Articles
Fun and Games
Winter's Here! Enjoy the Snow With Your Dog

Fun and Games
Is it Possible to Stimulate a Dog's Intelligence?

If you want to encourage your cat to play, you'll need to watch it closely. Start by gradually introducing a…