New Ways to Play with Your Puppy

Keeping busy prevents puppies from destroying things. This is a basic rule for any active, happy, and intelligent dog. 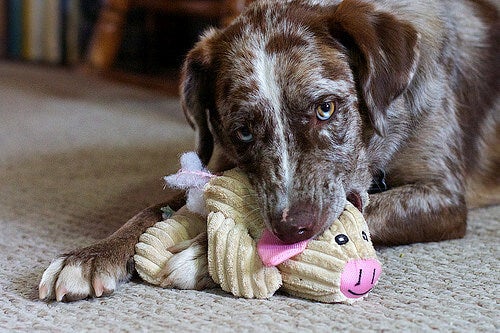 Below, we are going to give you 16 different ways to play with your puppy. They will help him learn how to interact with others and grow healthy.

In the first three months of life, the pet develops concentration, intelligence, and senses like smell and hearing. The relationship with his owners and his social abilities are also strengthened.

It should be pointed out that games are a useful tool to educate dogs. These ways of playing with your puppy will help you foster his relationship with the environment and establish boundaries. This, in turn, will prevent unwanted behavior, such as destroying things or excessive barking.

Out of all these ways to play with your puppy, the ones that stand out are those that allow the puppy’s attention to develop. Ultimately, this is essential to the animal’s learning.

On the one hand, silent games consist of walking the pet with his leash. If the owner stops, the dog does too. The person’s feet indicate when to keep going. This will help develop coordination.

On the other hand, it is advisable to acknowledge that important progress is being made, even from the front door of the house. It will prevent anxiety that usually affects dogs that live in closed spaces. This anxiety sometimes sets off unwanted behavior such as destroying things and even diarrhea or vomiting.

The game consists of opening the front door and telling the puppy to stay still, while the owner or child leaves and closes the door. This should be repeated at least seven times. The goal is to achieve that he sits calmly when the person leaves. If the game goes well, he should be awarded with verbal congratulations or special food.

Find the newspaper and others

An interesting game involves managing to get the puppy to wear a backpack during his walk. Another activity that exercises his brain is asking him to bring a newspaper with his mouth to the house.

Another stimulating and fun game is ‘catch me if you can.’ It consists of tying a meter-long rope with a stuffed animal attached at the end to the end of a long stick. Then, you put the stuffed animal within the dog’s view while the person hides. When the puppy focuses on the stuffed animal, he will try to grab it with his mouth. The game also can be played with just a simple rope.

Calming a dog down with sounds is simple and gives him positive feelings when he is alone. The howls of wolves, birds that fly, dogs that bark, or sounds of farm animals stimulate the puppy’s brain and relax him.

Likewise, putting a large box in the middle of a room is another idea. It allows him to hide himself or objects inside it, or go in and out of it. Also, you can use it to play with him, as if you were another dog.

Furthermore, exploring and smelling new friends, canines, or humans stimulates the dog’s intelligence. If he likes the visitor, he will definitely show it.

It is also interesting to teach him to catch a frisbee. It is another way to play with your dog, that also helps him develop his coordination.

Additionally, it should be noted that looking for a ball is one of the most fun games. You only have to have a bit of patience, and repeat until the puppy learns not only how to pick up the ball, but also return it to you. Rewarding him with petting, words, or treats is essential.

Finally, a laser pointer also helps, because it moves around various places while he tries to “catch” the light. Besides being fun, it helps him keep his senses active.