Training Cats to Use the Litter Box

They learn to use litter boxes from the time they are kittens because it’s their instinct. However, poor placement, poor cleaning, stress, pain or disease can make the cat stop using it. 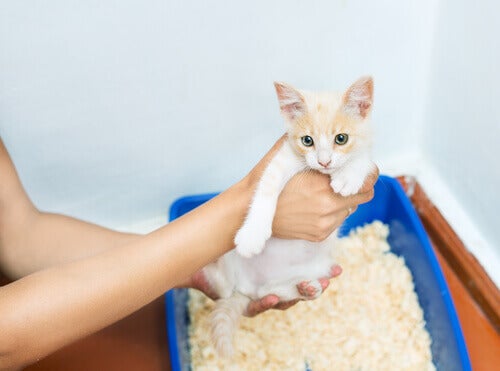 One of the things we like most about cats is how neat they are: they clean themselves, don’t usually get dirty and do their business in the same place. It’s instinctive for cats to use the litter box, and, when they don’t, it’s an indication that something’s wrong. Find out more about the causes.

Instinct and the litter box

Both in our homes and in the wild, cats hide their body waste: it’s part of their survival instinct, so as not to leave a trail of smell to potential predators. In the wild, cats use places where they can later scratch or make holes, such as sandbanks or dirt areas.

When they’re kittens, they learn to use the litter box simply by having it within reach. The first few times, they’re a bit clumsy and may relieve themselves outside the box, but it’s something instinctive: they learn it on their own. And besides, it’s something they like to do.

Therefore, whether cats use the litter box or not shows us that something is happening to them. If the cat is young or newly adopted, it’s telling us that it’s having a hard time adapting. If the cat is a senior, it may have some underlying condition or pain.

First of all, if a cat stops using the litter box, we must ask ourselves about the litter box and where it’s located. The litter box, just like the scratching post or the feeders, should be in a quiet and discreet area of the house, but easily accessible. It can’t be in a very transited area either.

For example, the closest and most accessible place for the cat isn’t under a table in the garage. When it feels like going to the litter box, it’ll be too far and perhaps, it won’t have time to reach it. Likewise, there’s no privacy or peace in the middle of the living room where there’s always movement. Therefore, it isn’t a good place either.

Each house is unique, but all have an accessible and quiet corner: next to the sofa, in a corner of the corridor, or perhaps inside a bathroom with the door always open.

Or maybe the problem isn’t the location of the litter box, but its shape. The litter box should be big enough for the cat to stretch inside: if it’s smaller, it might stress it. Some cats don’t like covered litter boxes either: they need to be able to move in it without feeling trapped.

To get the cat to use the litter box, try different types of litter boxes in different places. You’ll end up finding a suitable size and a comfortable but quiet place.

Sandboxes, as their name suggests, should have sand. We shouldn’t skimp on the amount of sand in the litter box. It’s in the cat’s instinct to dig and cover its body waste. A litter box with little sand is useless for the cat, and it’ll prefer going anywhere else. As a rough guide, the cat should be able to make little sand mounds up to two fingers high. With less sand, it won’t be satisfied.

For the cat to use the litter box, cleanliness is essential. They like to have clean, fresh sand, so collecting their feces and changing the substrate frequently is very important. In order to choose when to change the sand, we must pay attention to what our cat does: it’s not about our standards of cleanliness, but the cat’s. If the cat thinks it’s too dirty, it’ll avoid it.

Cats under stress may stop using the litter box. Stress can have many different causes depending on each individual house.

A recent move, an absence or a new member of the family, like children who don’t let the animal rest, can be great sources of stress. There have been cases of cats that stopped using the litter box during construction work on the street or in their house: the noise bothers them and stresses them out.

When a new cat is brought into the house, it’s also common for one of them not to use the litter box. We must take into account that at the moment of relieving themselves, animals feel very vulnerable. Thus, if the relationship between the two cats isn’t yet settled, they won’t feel safe enough to use the litter box.

When you suspect that your pet isn’t using the litter box due to stress, review its daily habits to find out what’s changed. If there are construction works outside, you can’t do much more than be patient and wait for them to finish. However, in many other situations, you can give the cat more peace of mind and the opportunity to be calm.

Cats are prone to kidney problems, and if they don’t go to the litter box you should consider whether it’s due to health issues. If the cat feels any kind of pain or discomfort, including incontinence, it’s to be expected that it won’t be able to relieve itself as it used to.

If your cat used to go to the litter box and it has suddenly stopped, then go to a vet. This may be a symptom of a developing disease and only a vet can diagnose and treat it properly.

In any case, we must know that it’s instinctive for cats to hide and cover their body waste. If our pet is failing to do so, it’s because there’s something bothering it deeply. Cats don’t understand punishment. You must get to the root of their discomfort, because scolding them won’t solve the problem.

How Many Domestic Cat Breeds Are There?
Did you know there is no official number of domestic cat breeds? This is because of different classification criteria around the world. Read more »
Link copied!
Interesting Articles
Entertainment
Tips for Buying a Dog Pool