After a puppy with great qualifications is selected, it will begin its training only a couple of months after its birth. During its adulthood, the dog will work and train (with a schedule) to practice its professional skills. In addition, it will get its well-deserved retirement at the age of eight. 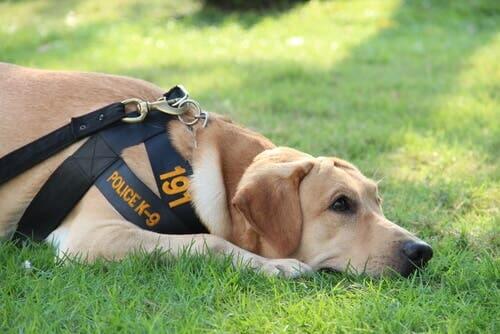 Police dog agents have very different tasks and missions. They will detect drugs, explosives, find missing people, and participate in delicate situations. If you’ve ever wondered how a dog can become a police agent, we’re excited to tell you what the life of a police dog is like up next.

Police dog agents in their early stages of life

A police dog’s life begins before they’re even born. A dog breeder that specializes in breeds with a genetic predisposition for work will carefully look after the male and female dogs that are going to mate together. Therefore, he or she will do their best to prevent any problems or issues during the female dog’s pregnancy and birth.

After being born and during their first few weeks, police puppies usually live with their mother. As soon as they’re around three weeks old, they’ll begin to explore their surroundings and walk by themselves. Thus, the breeder will start to get the puppies used to meeting people, hearing noises, and walking on different surfaces.

Between their seventh and ninth week, the puppies will go through a test that will determine their future. Their trainer will decide which kind of police work will suit them best. After this test, they’ll be paired with their human partner and start their training, which will be specific to their work.

When the puppy is about nine weeks old, its professional training will begin. Thanks to controlled breeding, trainers will know what their interests and skills are and the dog will start a profession that it can perform with dexterity and excitement.

The first step in their training is basic obedience: sitting, barking, laying down, etc. In addition, developing a great bond and trust with their human partner is also crucial. Nevertheless, the basic principle of a police dog’s life is obedience. You can’t be a good cop without discipline and a good education.

Once the young dog has mastered the basic obedience commands, it’ll start a training schedule specific to its role. This will depend on the skills it’ll need to develop, as rescue dogs in the mountains perform a different job to drug-detecting dogs at airports, for instance.

There are many different training techniques, but, today, almost all of them are based on positive reinforcement. This means that every time the dog obeys a command or performs the desired action, it will receive a prize. For example, some detector dogs are trained by relating a drug’s smell to their toy. Thus, the dog will quickly point out what it’s looking for in order to get a ball in return.

During this period, police dog trainers will make sure they integrate the dog in its future working environment. Therefore, police dogs who’ll work as rescuers will visit collapsed buildings and debris regularly and those who work in airports will start to walk around their facilities.

The duration of this training will depend on the trainer’s skill and the complexity of the job that the dog will be performing. The more skills it needs to acquire, the longer it will take to complete its training.

The life of an adult police dog agent

Once the dog has graduated as an agent, it will begin its real work. It’ll be assigned work schedules and a few days off. Dogs can’t work a full day every day and also need some days to rest in order to stay healthy.

Therefore, even if rescue dogs don’t need to perform work at a collapsed building, they’ll still be taken to visit caves to practice searches during the week. This will also be the same for detector dogs and guardian dogs. They never stop rehearsing their skills so they won’t forget them.

Like any other worker and after years of tireless work, a police dog agent deserves retirement. Every institution that works with dogs uses a few different criteria for their dogs’ retirement, but the most common are the following:

After the dog’s retirement, it’s time to find a suitable situation for every police dog. This usually happens in different ways depending on the institution. However, it’s common that sometimes the ex-partners themselves will seek out for adopters. Nevertheless, there are also some special associations and organizations that can assist them and their new owners.

After a lifetime in service, a police dog’s life will ends in a normal house with a new family. However, these aren’t normal dogs and need more stimulation than most pets. Even if they stop working officially, they’ll need a family that knows how to keep them entertained and provide games that will satisfy their desire to work.

Training Police Dogs: From Service to Retirement
It's been more than a century since police dogs joined the security forces. In this article we'll tell you all about training police dogs. Read more »
Link copied!
Interesting Articles
Advanced Training
What You Should Know About Guide Dogs

Pet therapy is now very common and several different animals are increasingly being used for that purpose. For this reason,…