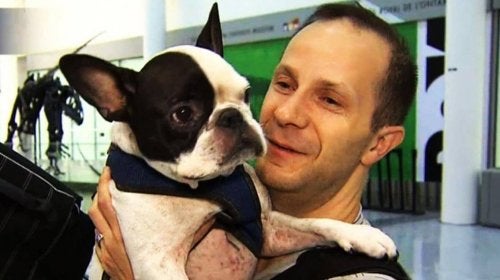 Not too long ago, you read a story about a rally race car driver who went airborne in his vehicle in order to save the life of a dog that was crossing the road. Well, this time it actually with a real airline pilot in a real airplane.  Amazingly, there are people who are willing to do anything to save an animal’s life. This true story will definitely touch your heart.

The flight Simba and the pilot were on

This pilot was working for a Canadian airline called Air Canada. At the time of the incident, he was piloting a flight from Tel Aviv, Israel, to Toronto, Canada. The animals are located in the cargo hold along with the luggage, where a beautiful French Bulldog named Simba was at.

Simba’s owner was traveling in the cabin with friends without a single worry because he thought his pet was safe. However, he had no clue what was going to happen next. Curiously, Simba was the only dog aboard. However, this was no inconvenience for the pilot, once he heard there was animal in danger, he didn’t think twice.

Simba was in danger

Apparently, while the plane was flying normally, the alarms suddenly went off because there was a problem with the temperature in the cargo hold. The temperature was steadily rising, which could have quickly suffocated Simba. However, it wasn’t a major problem for the luggage. At most, some suitcases might get banged up, wrinkled or faded. However, Simba could have died.

What would you have done in this situation? Maybe you could have thought that it was just one animal and there were no other animals aboard. A selfish person would have carried on without worrying about the animal. Fortunately, Simba was lucky enough to aboard the plane of an anonymous good-hearted pilot.

Once the pilot found out about the temperature problem in the cargo hold, he immediately flew to Frankfurt, Germany, to transfer the animal to another plane. His owner wasn’t able to travel with him, but he was assured his do’s flight would arrive around the same time he did. Thus, the animal would be supervised at all times.

This stop was a 75-minute delay for all passengers aboard Simba’s flight, which caused all sorts of reactions, but most reactions were positive. Most of the passengers understood that a life was at stake.

On the other hand, Kontorovich, Simba’s owner, has only kind words to say about the pilot. “He is as if he were my son, he is a family member, he is everything to me. If something would have happened to him, I would have died out of misery,” Kontorovich said with tears running down his cheek.

This sudden stop most likely cost the airline hundreds or even thousands of dollars. However, some said the pilot made the right call. An aviation expert said: “The pilot is responsible for all the lives aboard, whether human or animal.”

Even though it cost the airline and passengers time and money, the final decision was up to the pilot. In order to protect the animal’s well-being and the pilot ended up saving his life. Simba landed safely in Toronto and was recounted with his owner a few minutes after landing.

Although the airline definitely lost several of thousands dollars, the pilot’s heroic act gave the airline free advertisement and in turn received thousands of new customers. This action was a so-called blessing in disguise.