The Ancient Roman animals were part of legends, used as pets, or used during sacrifices, shows, and wars. 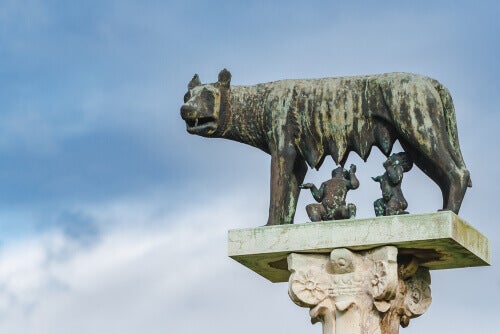 Each civilization took certain species that it had “at its disposal” and linked them to legends, gods, or magical characteristics. They used others as pets, (many still are today), and others for food or transportation. This occurred with Ancient Roman animals.

The history of this magnificent civilization starts with a legend starring two brothers, Romulus and Remus, and a she-wolf, Luperca. According to the legend, these twins were saved from being killed by the King, who wanted to drown them in the Tiber River.

Miraculously, the basket where the twins slept reached Palatine Hill. A she-wolf found the basket there and suckled the twins. A while later, a shepherd found the children in a cave and adopted them.

Romulus ended up killing Remus and founding a new city built on the Palatine, called Rome. The city we all know and love!

Experts don’t know much about the everyday life of this era, but the representations in mosaics, statues, and coins give us a glimpse into their habits and activities. You should also learn about the Ancient Roman animals used as pets.

For example, in the city of Pompeii, one of the houses that remained standing has a mosaic at its entrance that said “cave canem”, which translates into “beware of the dog”. Dogs were very common at that time as family companions and, above all, as guardians.

But they weren’t the only animals Romans chose for their homes. Some had geese! The lower classes couldn’t afford certain “luxuries”, so they kept these birds, as their squawk could alert to the presence of strangers.

In fact, there’s even a legend that states that, thanks to a goose, the settlers were able to save the city of Rome from an attack by the Gauls in the 4th century BC.

Emperors were quite strange and witty people, and they had very peculiar pets. Julius Caesar not only raised rabbits but he also had a giraffe. Both Domitian and Caracalla had a pet lion.

You’ve surely seen the movie Gladiator. Although it’s quite in tune with Hollywood’s tastes, the truth is that it allows you to know a little more about the habits and practices of the time of the Emperors.

The Ancient Roman animals that were chosen to kill prisoners or those sentenced to death were felines (such as lions, tigers, and leopards), mainly brought over from Africa. The jailers locked these animals up for days. They only opened the cage after tying the prisoner to a pole in the center of the Colosseum.

As this was a bit “boring” for the spectators, so they decided to make the show a lot more interesting. For example, the jailers urged the beasts to devour prisoners on the spot.

And, of course, there were many “shows” in which people had to kill an animal such as a hippopotamus, an elephant, or a deer. After the show, the most valuable specimens were taken to the place where the current emperor kept all his treasures. At the same time, we can’t ignore the relationship of the Romans with animals in times of war and battle, even in hunting.

The Romans resorted to different species, such as turtles, eagles, deer, hedgehogs, ravens, wolves, donkeys, rams, scorpions, butterflies, mice, or mules, to give the order to carry out certain war formations. Their idea was to emulate the outstanding characteristics of each animal.

The Role of Dogs In Ancient Civilizations
Dogs in ancient civilizations played an important role. We'll tell you all about the history of dogs and for just how long dogs have been man's best friend. Read more »