Turtles as a Cultural Symbol

Capable of living over 100 years, these marine animals are revered in various cultures. Their longevity, combined with their ability to adapt and tenacity in migrations of thousands of miles to spawn, has turned them into a symbol of wisdom, movement, creation, patience, and skill. 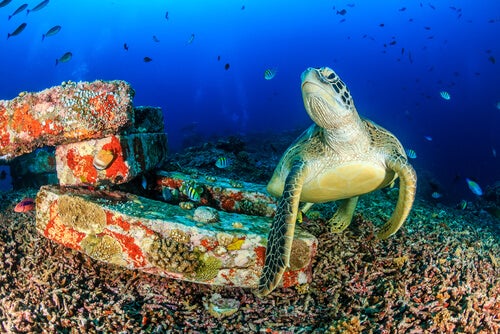 Turtles represent sluggishness to some people and wisdom for others. However, other people consider turtles as a symbol of longevity. In different cultures, this reptile and their famous shells represent different things. Let’s take a closer look at turtles as a cultural symbol.

Turtles as a cultural symbol of longevity and wisdom

Did you know that chelonians are the animals that have lived longest on our planet? That’s right! Experts found that the oldest turtle fossils were nearly 200 million years old.

On the other hand, land turtles don’t usually live as long as sea turtles. In addition, turtles that live as pets tend to live longer if their owners care for them and feed them accordingly. As a result, turtles are linked to longevity and, due to their age, wisdom. For example, in many children’s stories, turtles represent old family members that teach little ones in the family or tell stories about the past.

However, we can see that these reptiles know how to face adversity, accept changes, and continue day by day without concern for the problems or challenges. Without a doubt, these animals can teach us some good lessons.

When it comes to sea turtles, many people associate them with movement and tenacity. These animals must travel thousands of miles each year to spawn on the coasts. They do this, even knowing that a very low percentage of the litter will survive. They also exert significant effort digging holes using only their legs.

This is another reason why turtles are cultural symbols of creation. In fact, in some cultures, people believe that turtles were the beings that gave life to the universe. People used their shells to study star constellations, as their shells are divided into 13 parts, just like the phases of the moon each year.

For example, in some tribes of North America, in Hindu mythology, in Balinese cosmology, and in Chinese beliefs, turtles are symbols of heaven. They support the planet and are in charge of uniting the earth with the universe.

Through the centuries, people have highly respected these animals on a mythological and religious level. For example, in Japan, they are symbols of good luck, and the Greeks associate them with the goddess of Aphrodite. Ancient sailors also followed these creatures across the equator as they sailed the seas of Africa and headed to the South Atlantic, just as thousands of turtles do every year.

Turtles as a symbol of patience

The supposed sluggishness of these reptiles is often related to patience and skill. However, this is a misnomer as they can actually be very fast.

You’ve probably heard of the story of “The Turtle and the Hare.” In the story, the hare challenges the turtle to a race, confident that it would win.

However, the long-eared mammal relied too much on its speed. After taking a break and falling asleep in the forest, the turtle reached the finished line first. The moral of the story? Turtles benefit from their perseverance, commitment, and patience. These animals never give up!

Animals and Symbolism
Whether because of some ancient legend or popular belief, animals have always been used as symbols. Today, we'll look a bit closer at animals and symbolism. Read more »
Link copied!
Interesting Articles
Tortoises and Reptiles
The Common Leopard Gecko Is the Ideal Pet

Tortoises and Reptiles
Pyramiding in Turtles

Among the various diseases that affect chelonians, pyramiding in turtles is one of the most significant. In fact, it largely depends on how we manage the animals. What is pyramiding…

If you plan to bring home a reptile as a pet, you need to be aware of certain needs that are different from other more conventional pets, such as dogs…

Turtles are a popular exotic pet. They're small and easy to look after, and some people are now choosing them…

Nutritional variations are very typical in a reptile's diet. However, this isn't necessarily the case when it comes to a…