Although numerous animals, from invertebrates to mammals, have evolved shells, none has an architecture like that of turtles. 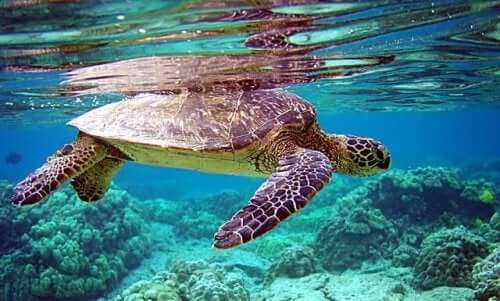 Turtles are reptiles that belong to the superorder Chelonia. They’re characterized by having a hard shell that protects their vital organs. Only their head, legs, and tail are clearly visible. Would you like to know which are the main turtle species? In this article, we’ll tell you about these beautiful creatures.

Turtle species and their characteristics

Turtles are oviparous and incubate their eggs digging on the ground or in the sand. There are different species of chelonians according to the kind of food they eat: herbivores, carnivores and omnivores. Some of them live in the sea and others on land and rivers.

This turtle lives in the European countries bordering the Mediterranean Sea. The female is larger than the male and they generally live very long, with some living up to 110 years.

They have daytime habits and hibernate during wintertime. They also have excellent eyesight, can lay eggs twice a year and are even able to recognize people. This species is also an ectotherm, as they need exposure to the sun to warm their bodies and thus accelerate its metabolic functions.

Its scientific name is Trachemys Scripta Elegans and it lives mainly in the areas near the Mississippi River in the United States, although it can live both in water and on land.

Many people choose it as a pet and its size can be up to 12 inches, with the females being larger than the males. In addition, its body colors are dark green with yellow spots, while the head has red spots on the sides. This, of course, explains this turtle’s name.

It is the largest of all sea turtle species, measuring up to 40 inches long and weighing 1300 pounds. Its front legs are longer than those of any other chelonian. The males never leave the water and the females come out to the beach to lay up to 100 eggs at a time.

It lives in tropical and subtropical seas, where it feeds on jellyfish they can bite and swallow thanks to the special spines on their throats. One of the leatherback’s most deadly enemies is sea pollution, as it confuses plastic bags with jellyfish.

According to some scientists, it has the ability to generate body heat on its own, even though it’s a cold-blooded reptile.

This species inhabits a large territory composed not only of Russia but also of China, Pakistan, and Afghanistan. Females measure 8 inches long and males around 7 inches. They can also live up to 50 years in the wild.

Aesthetically, it has a rounded carapace and four nails on each leg instead of the five that the rest of the chelonians have. Furthermore, it can’t withstand temperatures above 82° F and usually buries itself to cool down.

Its habitat is in Mexico and the United States and it inhabits tropical and subtropical seas. This species is rather large, weighing about 440 pounds and can measure up to 12 inches in length.

In the wild, it can become invasive and is usually chosen as a pet as it’s easy to take care of it. This turtle eats pretty much anything and is omnivorous. In addition, it likes to walk in the sun and prefers quiet or slow waters with muddy bottoms.

This chelonian is an endangered species due to hunting and sea pollution. During their migration period, they have to travel no less than 1,600 miles to lay their eggs on the beach. The females return to the same sand where they were born to lay their eggs.

The hatchlings are born after 75 days at night time, and they race to the sea to avoid being victims of predators.

These turtles live throughout both the Mississippi and Tennessee river systems. Its carapace is green with yellow and black spots. The males of this turtle have a shell length of around 6 inches while the females can be up to 11 inches long. In addition, they prefer warm temperatures (25-30°C) to live in. They always need to be in contact with sunlight and feed on algae, tadpoles, fish, and crayfish.

The last of the turtle species on this list is also an endangered one. Hawksbills get their name from the shape of its hooked jaw. Similar in appearance to other sea turtles, it has flattened flippers for swimming, a pointed beak, and lives near coral reefs where it feeds on sea sponges. In addition, they lay eggs every two to four years, always between April and November.

In summary, a lot of turtle species around the world are considered endangered, as we can see. Therefore, let’s hope awareness grows in this matter and we can help change their situation around by stopping pollution generation that eventually reaches the ocean waters.