Do Animals Possess a Sixth Sense?

Have you ever noticed your pet acting in an unexplicable way. Some attribute these strange behaviors to a sixth sense in animals. Discover more today. 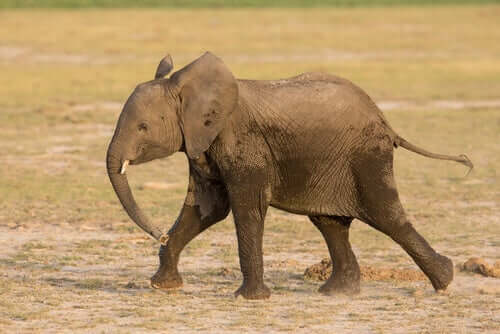 We can’t quite put it into words, but many believe that animals possess a sixth sense. In others, they have the ability to sense or foresee certain events or situations. For example, they have the possibility to detect illnesses, natural catastrophes, and even paranormal presences before humans can. We’ll take a deeper look at this interesting issue in the article below.

Perception and a sixth sense in animals

The perceptive faculties of our pets, as well as those of other animals, are amazing compared to those of animals. En different situations, they have the ability to detect anything from hurricanes to illnesses, thanks to how highly developed their senses are.

This is one of the characteristics that perhaps differentiates human beings and our “civilized” way of life. We don’t need our senses to be as developed as animals do.

For example, dogs have 40 times more olfactory cells than human beings do. And this helps them identify objects, people, and other animals that are over 300 meters away. But that’s not all. Their ears have a superior range of hearing, meaning they can detect sounds even though their source is far away. This explains why fireworks, storms, and other loud noises and scare them.

When it comes to cats, they also have very developed senses and can react to vibrations and sounds that are imperceptible to human beings. Their sight is exceptional, even in the dark, and their sense of smell is exceptional. So much so that they can perceive barometric and electrical phenomenons that other species cannot.

A sixth sense in animals regarding death

There are different incomprehensible behaviors on behalf of animals that have to do with their “ability” to foresee certain things… For example, someone’s death.

Perhaps you’ve heard the story of Whinston Churchill, the British prime minister at the beginning of the 20th century. When he became seriously ill, his faithful cat Jock kept him company.

The feline refused to leave Churchill’s bed under any circumstances. One day, when the doctors declared that the prime minister was better, the cat finally left the room. This alerted the professionals who, upon arriving, realized that Churchill had passed away.

A sixth sense in animals regarding natural disasters

There are many examples that we can provide to demonstrate how an animal’s sixth sense allows them to foresee natural events. When natural disasters are on their way, they often seek refuge or try to escape.

This was the case in Sri Lanka, just moments before a tsunami scoured the coasts of the island. Dogs, cats, orangutans, hares, and even elephants began to flee desperately. They did whatever they could to get away from the shore and reach the highest parts of the country.

Nobody could understand what was going on until minutes later. All of a sudden, they saw how waves began to rise up and bang strongly against the shore, devastating everything that was in their path.

But you don’t need to see hoards of animals running towards the forest in order to see the “power” they possess. In Italy, in a pond in L’Aquila, a great number of toads made a desperate exodus just before an earthquake occurred in the region.

The scientific explanation is that earthquakes release positive ions and electromagnetic impulses that animals are able to detect. This is a gift that human beings don’t possess–or perhaps it’s an ability we’ve lost as a result of the evolution of our species.

Perhaps animals aren’t aware of exactly what’s going on–whether it’s a tsunami, an earthquake, or a volcanic eruption. But what they do sense is that something strange or dangerous is occurring. Just as if there were a stampede of some large species, for example.

Illnesses, emotions, and the sixth sense

Lastly, we must also talk about those cases of animals that are able to detect illnesses or depression in their owners. Of course, this is more common among pets.

How does a cat or a dog know that its owner is sad or sick and come to offer comfort on the couch or bed? Why do some animals become upset when someone they love is crying, as often is the case with babies. How is it possible for horses to interpret human emotion? And what about those animals that have somehow alerted their owners about the presence of cancer or diabetes?

We can’t offer a precise response about the existence of a sixth sense in animals. It’s not just a matter of science but has to do with personal beliefs as well. However, no one can deny that animals have some amazing abilities that human beings do not possess.