Home » Animals » Domestic Animals » Cats » Night Vision in Cats – What Do We Know About It?

Night Vision in Cats – What Do We Know About It?

Cats have a great night vision because of the high number of rods in their retina. These are sensitive to dim light. 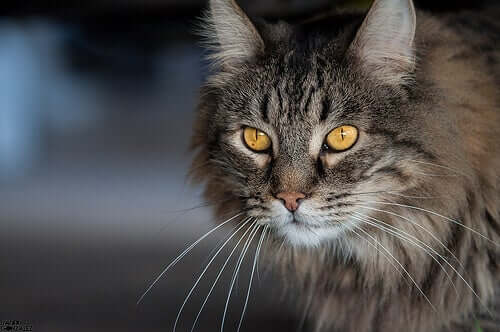 Usually, cats are a lot more active at night than during the day. This is due to their hunting instinct and because they can see in dim light. So, in today’s article, we’re going to tell you everything you need to know about night vision in cats.

You can observe at first glance how a cat’s eyes are very different from human eyes. Their pupils are elliptical and vertically oriented. They can open wider than our round ones, and they allow more light in. That’s why night vision in cats is greater than that of other animals such as dogs.

Feline eyes contain a membrane called tapetum lucidum. It’s a layer of tissue located at the back of the eyeballs that reflects the light rays so these can reach the retina without obstacles. What makes their eyes glow in the dark is just the light reflected in the tapetum.

Also, the design of a cat’s retina is also able to see in dim light conditions because it has more rods than cones. Rods are more effective in terms of light absorption and cones are responsible for absorbing colors (this ability is more limited in cats than in humans because they can see the blue and violet range better than the red one).

All of these characteristics, so inherent of felines in general, and cats in particular, work together. Mainly to be able to send a signal from the optic nerve to the brain, regardless if it’s dark.

What happens during the day?

Now that you know what night vision in cats is about, you’re probably wondering how they work under bright sunny conditions. First, don’t worry, your cat won’t go blind or anything like that. Their pupils, the same as ours, widen or narrow depending on the brightness of their environment. They get smaller and turn into a vertical line when there’s a lot of light and then open up when it gets dark.

The most interesting part of all is they don’t need to close their eyelids entirely when under full light. The cat-eye system is like a curtain that partially shuts down. It minimizes the opening of the retina without losing its ability to see under bright light.

What else is there to know about night vision in cats?

Feline eyes are truly fascinating. They’re so different from human eyes! Some interesting characteristics of cat vision are:

1. They have a greater field of vision

Humans can see up to 180° angle. In contrast, cats have the ability to see up to 200° without moving their heads.

Some say that a cat’s eyesight is eight times more developed than human beings because they don’t need the same amount of light as we do to be able to see at night. Even though they cannot see in complete darkness, they can still take in any dim light from their environment. For example, when the light of the moon or a street lamp reflects through the window.

3. Felines perceive movement thanks to their night vision

Cat’s eyes are a tool they widely use to obtain food. They can distinguish when an object or small animal nearby moves around. So, they must react fast to it because otherwise, they consider it static.

4. They see well at middle distance

Felines have an optimal field of vision that ranges between 10 and 20 feet. They’re myopic beyond that distance, and farsighted when under 1 foot.

5. They see blurry during the day

Cat eyesight isn’t too good in bright environments, even if they have their own ways of dimming it up. Most of what they see during the day is somewhat blurry. 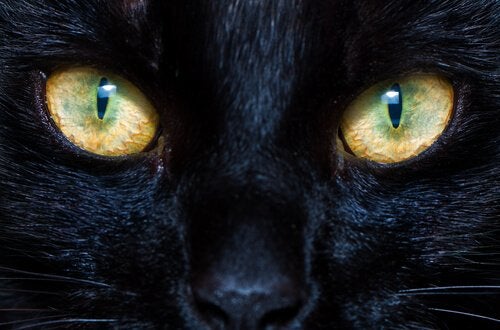 Cats’ and Dogs’ Pupils: how they work
Cats' and dogs' pupils work very differently to human pupils. Their workings, their shape, and their abilities constantly surprise the scientific community. Read more »
Interesting Articles 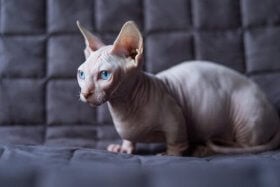 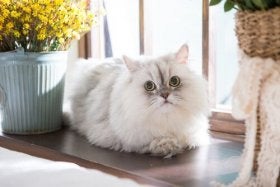 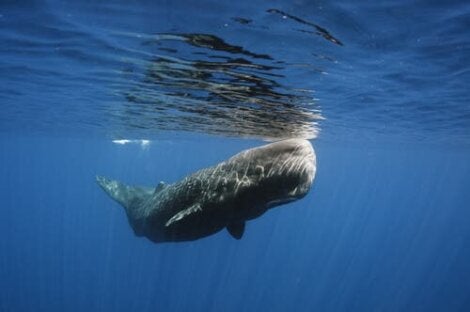 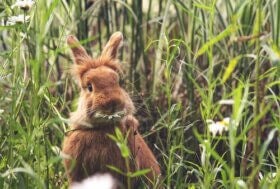 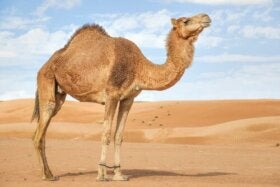