The Amazing Cognitive Abilities of Parrots

Parrots are a group of birds that, like corvids, stand out for their amazing cognitive abilities. 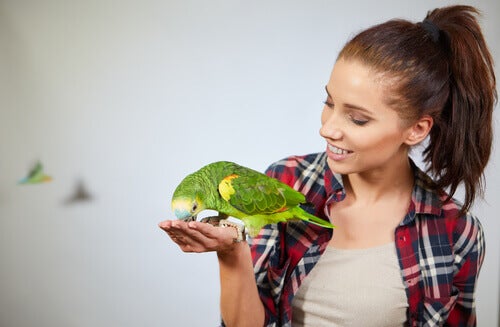 Bird intelligence is evident in corvids, but many species in the group of parrots also stand out for their amazing cognitive abilities.

The level of intelligence in parrots can be compared to that of primates in many cases. This even though their cognitive abilities are lower than a two-year-old child. However, when presenting the same tests to parrots, primates, monkeys, and young children, these winged animals performed better than monkeys and about the same as chimpanzees.

Parrots have amazing cognitive abilities and can solve problems

The logical or causal reasoning is their ability to solve problems, and draw conclusions. They also learn from the facts and establish cause-effect relationships between them. There are many ways to measure this type of reasoning in animals. For instance, the comparative studies between parrots, monkeys, and primates required many tests.

Some of the tests in which parrots stood out in the various experiments were:

That is the test in which one must establish cause-effect learning to obtain a reward.

Parrots, like primates, have a highly developed region connecting the cortex and the cerebellum. In birds, this region is called the medial spiriform nucleus. In parrots, this area is about two to five times larger than in other birds. All despite the fact that their brains aren’t that large.

The equivalent zone in mammals is the pontine nuclei, which are larger in humans and primates than in other mammals.

The neural pathways connecting the cortex to the cerebellum are thought to play an important role in controlling complex behaviors. This could be the answer to parrots’ surprising cognitive abilities.

Do parrots understand what they say?

Thanks to the syrinx, these birds can imitate sounds. But do they actually understand what they’re saying? With new discoveries about their intelligence, researchers think they can’t duplicate a sound without learning something. So can parrots learn sounds and handle them based on specific criteria?

Parrots live in groups and communicate with different sounds in their natural habitat. Each group (and even each breeding pair) has its own distinct dialect and a whole call log with subtle modifications for each situation.

The most curious thing is they learn these calls. That is, they’re not innate in chicks. In fact, the latter will learn the “speech” of their adoptive parents if they move from one nest to another. Parrots also recognize each other by associating certain sounds. It’s as if each individual had a first and last name.

This ability to use sounds together with their intelligence reveals that parrots have amazing cognitive abilities.

This case is a great example to appreciate the cognitive abilities of parrots. Alex’s guardian, psychologist Irene Pepperberg, trained the animal for 30 years. The gray parrot learned 100 different words throughout these years, distinguishing colors, shapes, materials, and quantities from one to six.

The intelligence of this particular parrot was compared to that of a five-year-old boy. Alex’s training consisted of numerous repetitions and associations, thanks to which he was able to identify the shape, material, and color of an object shown to him.

However, we still wonder if Alex was able to understand and use all the words they used for communicating with people.

There’s still a lot to learn about animal intelligence and all the secrets it entails. One thing is clear though, there are many species with amazing cognitive abilities. Thus, we must respect the integrity of every living being and treat them as we would like to be treated.

Why Parrots Molt and Their Plumage Condition
When parrots molt and the condition of their plumage indicate whether they are in good health or not. They molt for different reasons, including stress. Read more »
Link copied!
Interesting Articles
Birds and Lovebirds
Characteristics of the Sparrow Family