The Cognitive Ability of Crows

Crows show cognitive ability comparable to that of various primate species. Here, we're going to show you data that supports this statement. 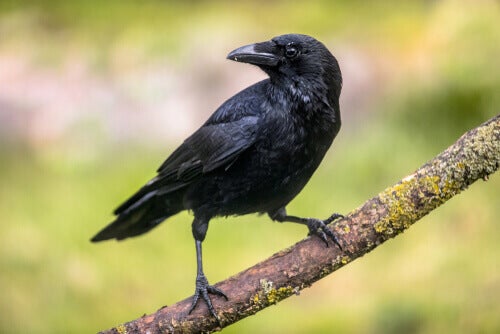 A good way to start this topic off is with that infamous quote from Lewis Carroll: “Why is a raven like a writing desk?” Or rather, how are crows like monkeys? Corvids, like primates, have a great cognitive capacity for memory, despite being such different species. If you’re curious about the intelligence of these enigmatic birds, then keep reading! Let’s take a closer look at the cognitive ability of crows (and ravens!).

The cognitive ability of crows

Crows, ravens, magpies, jackdaws, carrion crows, and Iberian magpies belong to the family of corvids. This group is well-known for their great intelligence and abilities. There are many studies that test their cognitive abilities. Researchers have shown corvids stand out for:

The high cognitive capacity of primates is due to working memory, short-term memory storage, and the manipulation of information. Other mental skills like planning or cognitive flexibility depend directly on working memory.

The results of numerous studies with corvids demonstrate that, throughout their evolutionary history, they have developed a great capacity for working memory. In fact, it’s equivalent to that of primates. For example, there was an ethological experiment from psychologist Balakhonov and his team, which we’ll explain below.

The cognitive ability of crows and primates

Firstly, Balakhonov trained two specimens of black crow (Corvus corone) for ten months. This was similar to a previous experiment with two species of macaque. Then, the experiment involved presenting a series of visual stimuli on a screen and the animal’s tracking head and eye movement. They also previously trained the birds to keep their heads centered.

The visual stimuli were colored squares that remained on the screen and were always the same. They disappeared for a few seconds and then reappeared with some modification. When there was a change in shapes, the animal pecked at the screen.

The researchers discovered that the maximum number of elements the corvid could handle on the screen was four. This was a very similar result to the primates.

The cognitive ability of crows helps them solve everyday problems. For example, they can create tools from memories of previous instruments created for similar situations. In fact, they can even remember those made by another partner.

As a result, they can solve problems that require several steps in a specific order. This is because they have the ability to store this information and then use it sequentially.

However, repeating experiments on animals as different as birds and mammals is possible. This is because they share some similarities, such as great cognitive ability, a very precise visual system, or color resolution.

Despite having different evolutionary lines, these experiments demonstrate that different species can share characteristics due to convergent evolution.

Solving problems in the natural world can mean the difference between life and death. In conclusion, it’s not surprising that living things display such extraordinary abilities.

The Crow in Popular Culture and Mythology
The large crow is an iconic species of corvids, a group of highly intelligent birds. Continue reading, today's article is about the crow in popular culture. Read more »
Link copied!
Interesting Articles
Birds
How Many Turtle Dove Species Are There?