Characteristics, Behavior, and Habitat of the Wild Cat

Pesticides and poisons used against this cat's prey, such as moles or other rodents, have made this species increasingly scarce. In addition, its genetics are being altered by the possibility of crossing with unsterilized domestic cats. 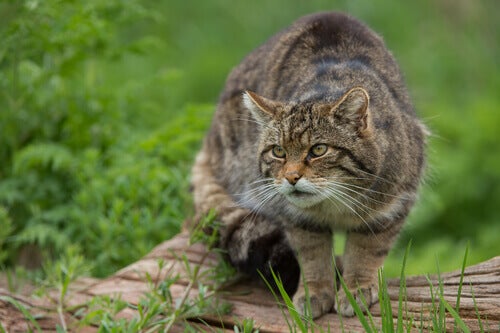 The wild cat (Felis silvestris) is a carnivorous mammal that belongs to the feline family. It has diverse variants among which the Asian, the African, and the European species stand out. In this article, we’ll be talking about these in more detail.

The wild cat’s characteristics and identification

This wild cat is similar to the domestic cat, although it’s bigger. It reminds us of big cat breeds because of its robustness. This cat can even weigh up to 15 pounds. In addition, the wild cat’s head is larger than a domestic cat’s head, compared to their body. They also have slightly smaller ears.

Their fur is of a yellowish-brown color on the back of the ears and muzzle. The hairs over the eyes and the vibrissae are bigger and wider than those of the domestic cat. Their whiskers are also white and slightly drooping. The eyes are not as varied in color as the domestic cat’s. In many specimens, they present light green and amber tones. In addition, their nose is usually pink.

They have several remarkable patterns on their fur, generally in the form of stripes. The wild cat has two stripes on the cheeks that stem from the eyes, several stripes that stem from the neck, dark stripes in the legs and trunk, and several rings on the tail that end in black.

Normally, they also have a dorsal line that runs along their back, and sometimes a white spot on their chest.

The wild cat can hybridize with the domestic cat. This means that their offspring can end up confusing them and endangering the purity of the species. That’s why unneutered domestic cats are a burden in their population’s recovery.

Behavior of the wild cat

This nocturnal predator can be seen in grassland areas at dusk and dawn. They’re solitary animals, who, in the case of males, can cover several miles day after day, while females are territorial and remain in the same place. This reminds us of the behavior of some of the big cats.

Their diet is based mainly on small rodents and birds, although they also hunt rabbits, and sometimes feed on amphibians or some invertebrates. There are even records of how the wild cat can hunt young roe deer, something that differentiates it from its domestic relative.

Despite this great difference, the truth is that the wild cat hunts in a very similar way to a domestic cat does. Moreover, it’s even difficult to differentiate the remains of their prey or tell them apart. This is because the wild feline also leaves the bones of medium sized animals, unlike other carnivores like the red fox.

As far as reproduction is concerned, the wild cat mates at the beginning of spring and the young are born at the end of spring or in summer. The female takes care of the litter and it will usually have four kittens that will live with their mother for around five months.

Habitat and conservation of the wild cat

The European wild cat lives in many forests around Europe. It’s most prevalent in much of Spain, but also in France, Germany, Scotland, Turkey, and Italy. However, the wild cat doesn’t appear in England, Ireland, Iceland, or the Scandinavian Peninsula.

They used to be much more abundant. However, it seems that the use of poisons and pesticides, in addition to human control of voles and other rodents, has made the wild cat a scarce animal. As we mentioned, hybridization with feral domestic cats is compromising the genetics of the species, and the wild cat is a great pest controller, as is the owl.

The wild cat thus becomes one of the last wild cats in Europe, along with the various species of lynx that inhabit this continent. It is the last representative of the fierce cats that once dominated these regions.

5 Extinct Wild Cats
Besides humans being responsible for some extinct wild cats, others disappeared because of changes in the planet's ecosystem.  Read more »
Link copied!
Interesting Articles
Cats
Feeding Your Cat: When, How, and How Much?