Why Are Lions the Kings of the Jungle?

We all know that lions are referred to as kings of the jungle. However, do you know why they've earned this title? 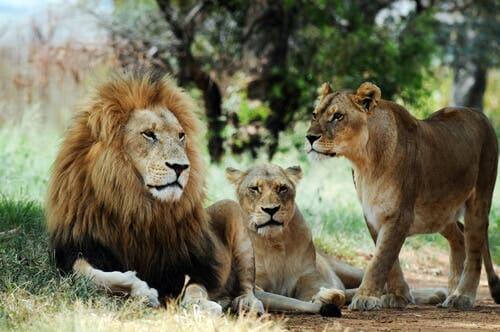 Why are lions the “kings of the jungle”? This is a question that many people ask themselves. So, in this article, we’ll try to give you an answer! The lion is one of the strongest cats in the African Savannah. In fact, this animal’s strength, energy, and majesty make them a truly imposing mammal.

Currently, this mammal is found in the wild in some regions of Africa, such as Kenya, Tanzania, Sudan, Congo, south of the Sahara, The Gambia, and Senegal.

Characteristics of the kings of the jungle

Next, we’ll look at some of the characteristics of the “kings of the jungle.” This will allow us to learn more about it and get closer to understanding this nickname.

The lions’ scientific name is Panthera Leo. They are approximately 6.5 feet long and weigh between 330 and 550 pounds. Lions have strong, stout bodies. They also have short and smooth coats that are an ocher-brown color.

This animal has a wide muzzle, small eyes, and thick, strong limbs. They also have a lush mane around their heads and necks. Lions are called “kings of the jungle” for their imposing and majestic look. In addition, they earn this nickname for their strong, fear-inducing roar, as well as their royal mane.

Lions are impressive animals that have the ability to dominate a herd. They are also the largest predator in the food chain. In fact, male lions are huge animals that can reach up to 550 pounds in adulthood.

At the moment, lions don’t inhabit tropical forests. Instead, they prefer the open space of the African Savannah. However, lions are sociable by nature. As a result, they live in groups. These groups generally have many young and female lions that are protected by one or two males.

A pride of lions

A group of lions is called a pride. When a new male arrives in a pride, they usually have to fight the dominant male. After the fight, the loser must leave the pride. Alternatively, the loser sometimes dies from the wounds they received from the fight. On the other hand, the victorious lion stays with the lionesses. Also, sometimes, this lion will kill the young in order to father their own offspring with the female lions.

Lions, for different social reasons, change prides. Some lions are nomadic, living alone, and others simply form a group with other male lions.

Within a pride, females usually are the hunters. However, male lions also hunt, although their main role is to protect the pride. On the other hand, when male lions do hunt, they generally go after large prey. As a result, their power and strength come in handy for this task.

When lions are hunting, they can reach speeds of 35 miles per hour. However, they can’t maintain this speed for a long time.

As a result, lions try to sneak up on their prey. They try to get about 30 yards away before attacking the animal. Then, once the prey is trapped, lions will bite their prey with their deadly fangs. In fact, their teeth can be up to 3 inches long.

Feeding the kings of the jungle

A lion’s diet comes primarily from large mammals, such as zebras, buffalos, rhinoceroses, young elephants, gazelles, giraffes, horses, and wildebeest. However, when it comes to eating time, it’s common for fights to break out among the pride.

The dominant male always eats first. Then, the adult females eat, followed by the younger lions and cubs.

Lions are known as kings of the jungle for their roars. In fact, no other feline has such a powerful roar. You can actually hear this impressive roar from 5.5 miles away.

It’s possible that the title “kings of the jungle” is also due to lions’ imposing presence, as well as their social behavior and customs.

Another reason for the lions’ name of “kings of the jungle” is their relationship with humans since the Middle Ages. Since this time, people have associated lions with kings, for their courage and bravery as well as their crowning mane.

However, you should remember that male lions aren’t the leaders of the pack. According to various studies, some prides are actually lead by females. These female lions take on the responsibility for hunting and protecting the pride.

To consider this from a historical context, one hypothesis is that the name “kings of the jungle” comes from the Middle Ages. People at this time considered lions to be a symbol of royalty. They also represented the strength of armies of the time.

Discover How Lionesses Hunt Their Prey
Did you know that female lions are responsible for finding food for their prides? Today we'll tall you more about how lionesses hunt. Read more »
Link copied!
Interesting Articles
Mammals
Meet the Squirrel Monkey