The Saber-Toothed Cat: The Most Fearsome Feline

The saber-toothed tiger is one of the most iconic felines of the prehistoric era. This already extinct animal specialized in hunting large prey with its huge tusks. 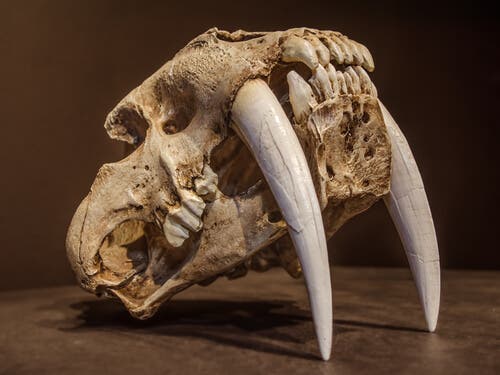 The saber-toothed cat is a majestic animal. With its spectacular tusks and hunting skills, it dominated the ecosystems in which it lived. Paleontologists consider this predator to have been the largest and most powerful feline in history. In addition, it inhabited the American continent until about eleven thousand years ago. Below, we’ll explain the most important characteristics of this spectacular animal.

The saber-toothed weapon of a fearsome hunter

The saber-toothed cat is not one species but three, belonging to the genus ‘Smilodon’. Males could weigh up to 661 pounds, being the largest feline that ever existed. Certainly, the main characteristic of this animal is its spectacular tusks. This bone structure stood out due to its size (up to 7 inches) and its function. Here are some fascinating facts about this hunting machine:

Paleontologists believe that saber-toothed cats lived in groups, although it’s still somewhat uncertain. This theory comes from the observation of some fossils showing wounds in the process of healing, suggesting that other felines were looking after them.

These social groups consisted of one or two dominant males and several females with their offspring. As for the young, it’s believed that they didn’t develop their saber teeth until they reached a certain age. Therefore, they remained in the group so that adults could feed them until they were old enough to survive.

Climate change and the disappearance of its prey

This prehistoric cat lived in the Pleistocene era. This was a colder and drier time than the current one. In this era, the glaciers covered much of Eurasia and North America up to the Great Lakes. South of these places, the dominant ecosystem was the grasslands, abundant in shrubs. In this habitat, animals as iconic as the mammoth and other large mammals that the Smilodon hunted used to live in large numbers.

About 13,000 years ago, a spectacular rise in temperatures began that completely changed ecosystems, favoring trees to the detriment of meadows. This caused a massive extinction of large animals, such as mammoths or giant deer, both being the saber-toothed cat’s prey.

Some authors point out that their specialization in such large prey was what ultimately caused their disappearance. Having such a robust constitution, they found it difficult to adapt to a world where their prey was so much smaller. As a result, they gradually ran out of food, which precipitated their extinction.

“They became extinct precisely because they specifically adapted to hunt large prey. The extinction of the megafauna was the reason for the disappearance of saber tooths as well as giant bears.”

Paul Palmqvist, Paleontologist at the University of Malaga, Spain.

Competing with humans for prey

Many other paleontologists speculate that the expansion of the Homo Sapiens was the cause of the extinction of these saber-toothed felines. According to one study, 80% of America’s large mammals became extinct shortly after humans arrived on the continent. Therefore, according to this fact, the saber-toothed cat may have become extinct due to the lack of prey and not because humans would directly hunt them.

In conclusion, we can’t be completely sure of the cause of the extinction of this majestic animal, but we can marvel at one of the greatest predators of all-time through recreations of its fossil record.