This feline, which comes from England, is sleek-looking due to its light, thin skeleton. But don’t be fooled; it’s strong and is also a great climber and jumper. 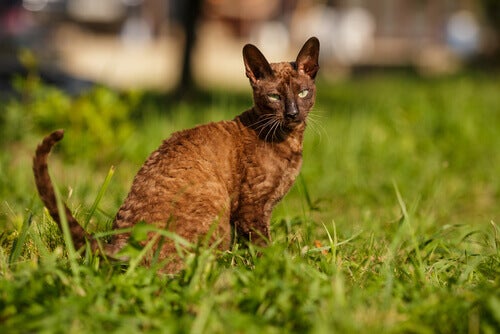 Would you choose a cat with short, wavy hair and a body like a greyhound’s as a pet? You’d at least be tempted, right? On top of these physical traits, these cats are very loving and lively, so you’d forgive their tendency to manipulate you with their meows and other unique cooing sounds. Let us introduce you to the Cornish Rex.

The origins of the Cornish Rex

The breed arose from a natural genetic mutation that occurred in 1950. In a litter of 5 offspring of two common short-haired cats, one of the babies was born with curls. This kitten was named Killibunker.

The breed takes its name from the county of Cornwall (England), where Killibunker was born. Likewise, Rex comes from a type of rabbit that has similar fur.

Ten years after this, the original Cornish Rex were crossed with Siamese cats. This is how they acquired the stylized body shape they have today, reminiscent of the greyhound’s slender form. They even have the same abdomen shape as these dogs.

These cats even have curly whiskers

The slender figure of the Cornish Rex is due to its slim, light skeleton. Despite this, it’s a strong animal with well-developed musculature, although its back is somewhat arched.

But what usually attracts the most attention is the short, wavy, dense and silky hair that covers their entire body, including the tail. Even their whiskers and eyebrows are curly!

In addition, they look heavier than they are; they normally weigh between 5 and 10 pounds. Other physical characteristics of the breed are:

An affectionate and manipulative cat

More affectionate than most domestic cats, the Cornish Rex is sociable and cheerful, and adapts well to different circumstances. And while they’re happy in quiet, comfy spots, they’re also great climbers who can jump very high due to their physical characteristics.

These kitties like to stay indoors surrounded by people; they enjoy playing with children and adults alike. However, they have to be socialized and educated correctly from a young age in order to avoid them thinking that they own the house!

Intelligence is another of their qualities, as well as their independent behavior. If they live with other pets, they’ll most likely become the leader of the group.

They’re also characterized by the wide range of sounds they make. They emit various types of meows, and also other peculiar noises that can sometimes become annoying if you don’t take measures to keep them in check. Keep in mind that these cats stand out.

Taking care of a Cornish Rex

The Cornish Rex is a strong and healthy cat with a life expectancy of 15 years. As such, you should only have to keep up with routine vet visits and comply with the vaccination schedule. Also, don’t forget to keep an eye out for fleas and other parasites.

But keep in mind that, as they lack more protective fur, these cats can be susceptible to colds, especially in their early years. And, of course, you have to give them the correct food for each phase of growth. In addition, even though this may not seem likely, in adulthood they have a tendency to obesity.

Besides this, these distinctive kitties are very easy to take care of. Although their hair is short, it hardly ever falls out, so a weekly brushing will be more than enough. On top of this, their hair has a low amount of the protein that causes allergies.

But nothing is perfect; the coat can become a little greasy. By rubbing it with a flannel glove, you can get it to shine more. In any case, it’s advisable to get them used to being bathed from a young age with the specific products your vet will recommend.

How Many Domestic Cat Breeds Are There?
Did you know there is no official number of domestic cat breeds? This is because of different classification criteria around the world. Read more »
Link copied!
Interesting Articles
Cats
This Is What Your Cat Hates the Most