This breed was born from a natural mutation back in the 80's in the United States. The first specimen was born bald, but when it finished growing its fur, this turned out to be curly. 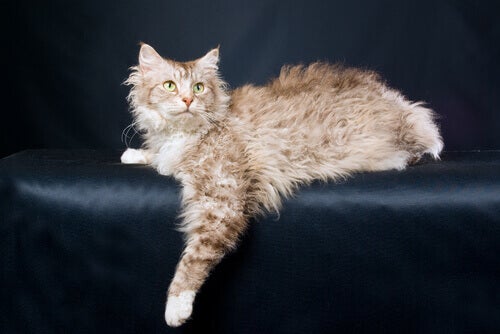 A cat with soft curly hair that aspires to be the cuddled one of the family: this is LaPerm cat. It’s a breed that arises from a natural mutation, and owes its name to the hair treatment that many people do to have curly hair for a long period of time.

A breed born from a natural mutation

The origins of this beautiful kitty go back to 1982 in the USA. There, in a barn in the State of Oregon, in a litter of a mixed-race cat –whose function was to keep the mice at bay–one member was born bald.

However, after a few months, the animal began to develop curly fur. These “unusual” kittens appeared again in subsequent litters. This led their owners, Linda and Richard Koehl, to start breeding them selectively.

Today, the LaPerm breed is recognized by all major cat associations. However, beyond their country of origin, it’s not very widespread – even though there are catteries in countries like Canada, England, New Zealand and Japan.

If you like affectionate cats that love spending hours on your lap, the LaPerm is for you. No doubt, you’ll enjoy petting its typical soft and curly fur.

Physical traits of the LaPerm cat

A LaPerm can have short, medium or long hair. What it always has – in various degrees of curliness – are its locks, which become more noticeable on the abdomen, neck, and base of the ears.

In addition, it has the following traits:

A cuddly and playful kitty

Obviously, the LaPerm cat is happy in its owner’s lap. It’s an ideal companion for older people, but also gets along very well with children and other pets. It’ll most likely follow its keeper around the house.

But, as cuddly as it is, like every cat, it’s also curious. It loves to explore its surroundings. And on more than one occasion, it’ll climb on its owner’s shoulders to safely scan the landscape.

Calm, intelligent, and affectionate, it’s an animal that will appreciate the existence of a courtyard or a garden. So, don’t forget to take measures to prevent it from escaping. And, if you give it toys, it’ll be more than happy to spend its energy, and to exercise its skills hunting rodents.

The LaPerm, a healthy cat

We’re dealing with a healthy pussycat in general, thanks to the fact that this breed wasn’t too manipulated by humans. The LaPerm has a life expectancy of between 15 and 20 years.

On the other hand, it doesn’t require much care. However, long-haired specimens need a little more care in brushing than their shorter-haired counterparts. Anyway, contrary to what you may think, their fur doesn’t get too tangled and doesn’t fall out too much.

Finally, like all kittens, it requires a quality diet in order to stay healthy and strong. Also, visits to the vet are necessary on a regular basis, not only to check its health, but also to keep up with vaccines and deworming.

The Norwegian Forest Cat: A Surprisingly Unknown Breed
In this article, we're going to tell you about the Norwegian forest cat. This is possibly one of the oldest breeds in the world, and one of the least known. Read more »
Link copied!
Interesting Articles
Cats
What's the Origin of the Persian Cat?

Interesting Articles
Mental Health
What If Your Cat Sleeps in the Litter Box?