This is a very active, intelligent and attached feline who will demand constant attention and pampering from its owner. Its origin, dating back to the 1980s, is the result of a cross between the Russian blue cat and the American longhair cat. 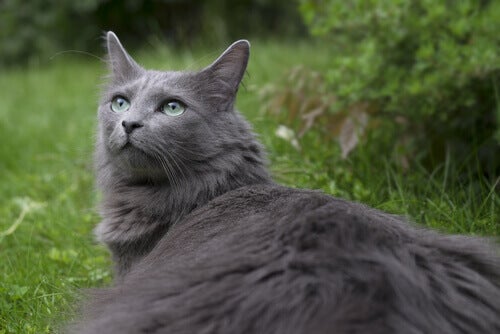 Imagine a Russian blue cat, with its green eyes and its characteristic silver hue, but with long fur. Then, add a whimsical and reserved character with strangers and, finally, add a touch of Germanic mythology in its name. The result is a beautiful cat specimen known as Nebelung. We’ll tell you all about it in this article, so keep reading!

The Nebelung: Like a Russian blue cat, but long-haired

The Russian blue cat is an ancient breed of felines originating in northern Russia. In the nineteenth century, some specimens arrived in the United Kingdom having both short hair and long hair as well. However, the latter’s population gradually disappeared and the former became the ones currently known today as Russian blue cats.

As early as the 1980s and on U.S. territory, a cross was made between a Russian blue male with a female American longhair cat. The result was a beautiful long-haired feline with a silvery shine on its fur.

As a result, the Nebelung was born (the name means “Son or inhabitant of darkness” according to German mythology). Soon, the breed was recognized by the major feline associations and became known around the world. However, these animals are mostly found in the USA, where they enjoy great popularity among cat lovers.

Meet the Nebelung or Nibelung, a breed of cat similar to the Russian blue cat, but long-haired. Smart, active and picky, this cat lets its owner know what it needs loudly and clearly by meowing a lot.

Physical characteristics of the Nebelung cat

The Nebelung is a medium-sized agile cat, with a well-proportioned body. It has an elegant appearance, yet, at the same time, it looks robust and strong, thanks to its balanced bone structure and muscles. Adult or full-grown males can weigh between 8 to 15 lbs and will typically be a bit larger than females.

Its physical characteristics also include:

An active, intelligent and whimsical race

The Nebelung cat is one of the most active breeds we know. It’s usually very happy if it can play and explore, so if you give them enough attention and don’t leave them alone for long, they’ll adapt well to life in a flat. However, you’ll have to be careful as they can learn how to open doors! In addition, this cat really loves to drink water from faucets and sinks.

Affectionate and intelligent, these cats can also tend to be somewhat whimsical and a little demanding. Moreover, they’ll let you know that they want something by meowing loudly and consistently. For this reason, we don’t recommend that this breed lives with very young children. Nevertheless, it’s a very sociable animal that can get along well with people, as well as with other pets.

It’ll most likely grow especially fond of a family member, whom it’ll follow throughout the house to demand pampering and other kinds of attention. However, and although it’ll eventually get used to new people and situations, at first it usually displays some shyness and a reserved nature with strangers.

How to care for a Nebelung cat

A cat with this kind of temperament and character will also require you to take good care of its diet and hygiene. In particular, you should be attentive and always keep its sandbox and its favorite spaces clean and tidy.

Because of the length of his hair, and in order to keep it nice, you’ll have to brush it three or four times a week. Quality food, on the other hand, will contribute not only to its good looks but to keeping it healthy, strong, and happy.

Moreover, this is an animal that doesn’t usually get sick and has a life expectancy of between 15 and 18 years. Likewise, as with any pet, regular visits to the veterinarian, vaccination and deworming should always be a part of the care regime.

All About the Peterbald Cat Breed
The Peterbald cat is a very sociable breed that behaves well along with other pets and children. What's more, it doesn't require regular grooming. Read more »
Link copied!
Interesting Articles
Cats
Cornish Rex, the Cat with Wavy Fur

Would you choose a cat with short, wavy hair and a body like a greyhound’s as a pet? You’d at…