Microchips for Cats: Are They Mandatory?

Do you know about microchips for cats? Here, we'll give you a little information about the usefulness of this device. 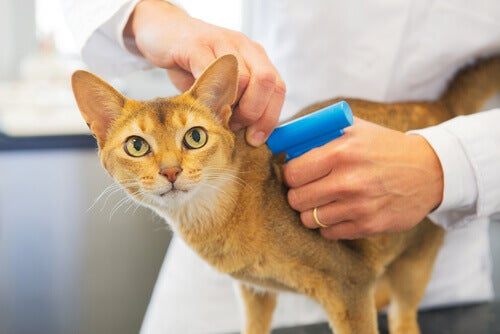 Microchips for cats aren’t mandatory; however, experts highly recommend this procedure. This is because it’s the most effective way to locate your cat if they get lost.

In addition, this device doesn’t cause any kind of discomfort to the animal. It’s also extremely useful. For example, it contains all the basic and necessary information about your pet. More and more people are choosing to microchip their pets, regardless of the species.

Microchips for cats: What are they?

These are electronic elements that look like small capsules. They are about the size of a grain of rice. However, they store all the necessary information about the animal. For example, they contain information such as vaccines, name, and contact information of the owner and vet. The best part is that microchips don’t hurt the animal at all. In fact, your cat won’t even know they have one.

Your vet will insert the capsule under the skin, almost always near the nape of the animal’s neck. However, your animal will barely feel a thing. Placing the capsule is similar to giving the cat a vaccine. It’s quick and virtually painless!

In addition, you only need to put in a microchip once. Then, you can register your cat and the vet also has information about them. This is very useful, especially to locate your pet if they escape or get lost. However, it’s also important to keep a close eye on your cat in general. They have a reputation for being elusive and escaping quite easily.

Fortunately, if they do escape, this device will identify and protect your cat. Best of all, it’s a very inexpensive procedure.

Microchips for cats usually range between 35 to 60 dollars. Again, they only need to get them once.

Is it mandatory to get microchips for cats?

Although it isn’t mandatory, we highly recommend that you get one. There are so many advantages. In addition, it’s a very economical and non-damaging procedure for pets.

However, some cat owners don’t get them for cats because their cats don’t leave the house. In addition, some people wrongly assume that if cats escape, they’ll adapt much easier to life on the street than dogs, for example.

Cats don’t adapt well to life on the street

It’s important to dismantle this myth. Cats who live in houses or apartments have a very hard time if they escape. This is even without assessing their indirect impact on the local fauna.

A microchip is essential in order to find an escaped cat. In fact, lost cats tend to react very differently than dogs. Their first impulse is usually to panic. For example, they might hide, making it much more difficult to find them. Also, depending on where they are, they might have a difficult time finding their way back home.

Stray domestic cats are often in terrible condition by the time someone finds them. After all, no matter how instinctive they are, they don’t usually have to hunt to survive. They also don’t have to fight other street animals.

In addition, people often find escaped animals wounded or injured by cars. Taking this into consideration, it’s a myth that cats adapt better to life outside than dogs do. Also, the primary obligation of any pet owner is to protect their pet’s well-being.

It’s essential to keep the information on the microchip up to date. Sometimes, you can get the microchip inserted, but forget to register your cat in a database. If they aren’t registered, the microchip is useless. You should also update your contact information, such as telephone number or address, as necessary.

Although microchips in cats aren’t mandatory, we highly recommend you get one. The reason is simple. They ensure your cat is protected and identifiable. If your cat gets lost, you will be so relieved they have one. Moreover, it’s a painless and inexpensive procedure.