Some of the Common Causes of Coughing in Cats

Coughing in cats is a symptom that could indicate various conditions, from less to more serious, depending on whether it's dry, repetitive, chronic ... 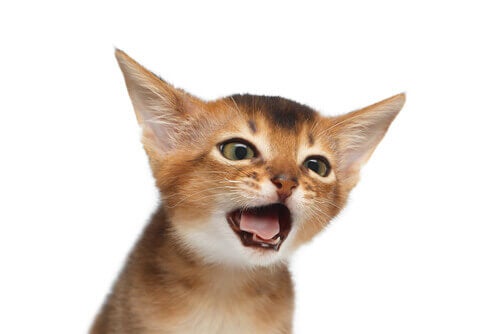 The problem of coughing in cats doesn’t always receive the attention it deserves. In contrast, some people get really scared when their furry friend coughs, especially if the cough doesn’t go away. Indeed, it can be a sign of different diseases, and so the best course of action is to consult a veterinarian.

What are the causes of coughing though? Well, it’s a reflex caused by the irritation of the respiratory tract. Common causes are a bacterial or viral infection, ingestion of a foreign object, an allergic reaction, feline asthma, and even pressure from the collar.

The sounds coughing cats make are different from humans; for this reason, the problem is easily identifiable.

Causes of coughing in cats

There are times when the cause is right there at home. It can be due to bacterial or viral agents, or even things like tobacco smoke or a strong perfume could be to blame.

The solution is simple in these cases, just keep your cat away from such irritants.

Heart failure could lead to coughing in cats

There may be a more serious cause, even though it may seem like a typical cough where there’s neither fever nor nasal secretions. A cat with heart failure will cough continuously.

It’s very important to consult the veterinarian in these cases as only they can diagnose and prescribe the appropriate treatment. In fact, it isn’t only a matter of relieving the cough, but of addressing the underlying problem – heart failure.

Animals are quite curious about things they find in the garden, in the park, etc. They may eat them and it’ll lead to a reaction in their body as they try to expel them. The energy exerted trying to eject it can manifest as coughing.

The collar is too tight

It may be due to absent-mindedness or a bad habit but some owners tie their cat’s collar too tight. The pressure can easily lead to a dry cough.

As you can see, it’s very important to make sure there’s room for two fingers between the collar and the animal’s neck when attaching the collar. There could be serious risks for the cat’s health otherwise.

Some parasites may settle in the cat’s lung wall and cause coughing at some point in your cat’s life. Among other things, this symptom will appear as difficulty breathing.

Some bacteria love cats, and kittens are their favorite. In addition, they may cause coughing, eye discharge, sneezing, fever, etc.

An animal will have difficulty breathing when they have asthma, and there may also be coughing, a general decline, and exhaustion.

Certain medications, insect bites, and even food can cause allergies in your cats. Along with coughing, there’ll be an inflammation of the respiratory tract, skin, and red watery eyes.

Is coughing in cats serious?

As you can see, coughing isn’t such a big deal when it happens once in a while. However, you must consult your vet immediately if it’s persistent.

Which types of cough are severe?

There are many treatments, depending on the severity of the cough and the agent that originates it. One of them could be an injected or oral solution. Don’t ever medicate your pet on your own; always consult a veterinarian who can prescribe an appropriate treatment.

Cat Hairballs – How to Deal with Them
Cat hairballs happen because the animals are continuously licking themselves. The hair accumulates on their tongue and ends up in their stomach. Read more »
Link copied!
Interesting Articles
Cats
The Donskoy Cat: Bald, Affectionate, and Intelligent