The Amazing Agility of Cats

This quality among felines has to do with their bone structure and their muscles, which are developed in an incredible way. Today, we'll look at the amazing agility of cats. 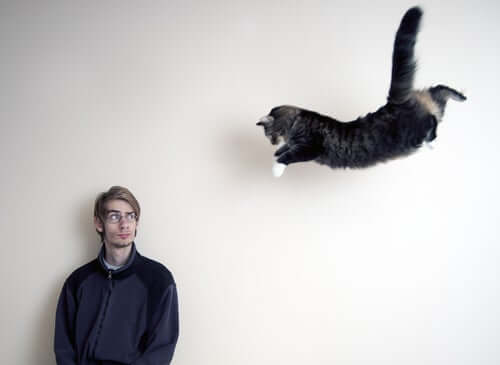 There’s a common belief that cats always land on their feet. And the truth be told, rarely, if ever, do we see a cat land in any other way. Besides this ability, cats have shown themselves to be one of the most agile animals in the world. So, just what are cats capable of? Today we’ll tell you all about the amazing agility of cats.

Why are cats so agile?

Cats are capable of climbing, running, jumping, and hiding in the most amazing ways. But what’s the explanation behind the agility of cats? Well, cats have the gift of great flexibility as well as a physical and muscular structure that gives them this gift. The structure of their skeletons plays a very important role in their capabilities.

Would you like to discover more about why cats are able to twist and turn the way they do? Well, we’ll tell you all about the formation of their bone structure.

The skeleton and muscles of cats

The discs between the vertebrae are thicker in cats. This means that the connections between one disc and another are less rigid than in human beings and in most other animals. Therefore, this lack of rigidity allows felines to move with greater flexibility.

Cats have that habit of walking on their tiptoes. With the passing of time, this has allowed the bones of their feet and their legs to become longer. This allows them to take longer steps. At the same time, by supporting themselves only on their tiptoes, they have a greater impulse to jump and to push off when running and scurrying as well.

What’s more, feline muscles function like springs, possessing greater flexibility than those of other animals. They’re similar to a bungee cord, having the ability to stretch and contract. And this allows cats to jump long distances, several times their height.

For example, when a cat wants to jump, the muscles in their rear extremities–which consist of diverse fibers–contract in an incredible way. When they relax, they behave like a catapult, giving the animal an amazing impulse.

How far does the agility of cats go?

Thanks to the agility of cats, these animals are able to perform many movements that are unheard of in humans and other animals. These include:

So, what do you think now about the agility of cats? These animals are truly mysterious and they’ll never cease to amaze us.

Hearing in Cats and Dogs: A Sixth Sense
If you have a cat or dog, then you've undoubtedly noticed your pet's amazing auditory abilities. Today, we'll take closer look at hearing in cats and dogs. Read more »
Link copied!
Interesting Articles
Cats
Using Cats as Therapy for Children with Autism