Using Cats as Therapy for Children with Autism

Roughly 1 child in 54 in the USA is diagnosed with a form of autism. But cats have been shown to be very useful companions in therapy because of their balance, independent, and reserved character. 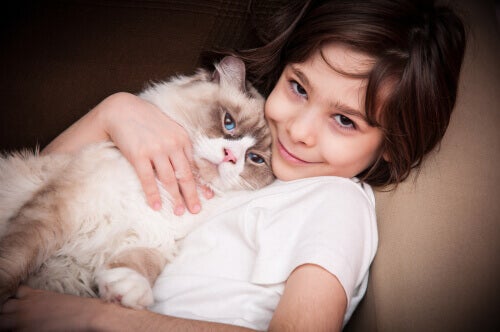 In recent years, animals have been used more and more in treating various medical conditions, including autism. Cats, in particular, have been shown to be very effective when it comes to therapy for people with autism. Already, thousands of families have experimented with animal therapy and are happy with the results.

Around 2% of children are diagnosed with Autism Spectrum Disorder (ASD), a neurological condition that affects, among other things, their ability to socialize. This is because their capacities for emotional interaction, planning, and communication don’t develop properly.

This can lead to autistic children becoming socially isolated. In other cases, they have a strong desire for social relationships but lack the social, conversational, or emotional skills to be able to develop them.

Using cats as therapy for autism

One of the reasons that cats are so good as therapy animals for children with autism is their personality. They’re calm, balanced, and reserved, which means that they tend not to be very invasive. This is exactly what a child with autism needs.

It’s been shown that using cats in therapy can help autistic children to develop their communication skills. This helps them to become more confident and express themselves better.

The great thing about cats is that they’re present with the child but without pressuring them for attention. They accept affection when it’s offered, but they’re not desperate for it. They’re just as happy being left alone. This means that the child is able to relax and gradually develop their unconditional love for the animal.

It also seems that autistic children can identify well with cats. They see similarities in them, such as being able to spend hours looking at an image in total silence. Cats act and react in a particular way, and observing this helps autistic children to become more confident to also act in their own way.

Here are two instances of families with autistic children discovering the benefits of having a cat by accident. They had already tried various different therapies without success, and their child’s autism had become a daily struggle for all concerned.

Sometimes, they didn’t know how to handle their child’s behavior. Bath time, bedtime, traveling, and setting limits had become daily battles. Furthermore, the lack of eye contact and their child’s specific fears made things even harder.

But for each family, there came a day, by chance, that a cat came into their home and changed their lives. They both say that they would have loved to have known about this option earlier.

Clover is a white cat who lives with a family with an autistic four-year-old boy, Richard. Richard lives with his father and older sister. His mother sadly passed away.

Over time, Richard began to have conversations with the cat. When he wanted to talk or play with Clover, he did, but when he didn’t feel like it, he was quite happy having the cat with him in silence. “Cats are like me”, Richard said to his father happily.

Thula is a cat who became best friends with Iris, an autistic girl who is also an artist. Iris was diagnosed with autism at the age of two. She lives with her parents, who had tried everything to help her with her autism. They had even tried therapy with dogs, but they seriously underestimated how nervous they made Iris feel.

Since Thula came into her life, the improvements were obvious. Firstly, Iris’s great fears disappeared. Now, she can bathe and travel in a car with Thula on her lap. When she can’t sleep, Thula approaches her and everything is better. Then, in moments of inspiration, Thula makes a perfect companion in her art, sitting beside her in silence in the park whilst Iris paints.

In both cases, the lives of these families have significantly changed. These cats have been the best thing that ever happened to them, and these aren’t isolated cases. With the help of cats, many children have been able to develop their communication and emotional skills.