Home » Breeds » Cats » The 8 Benefits of Adopting a Senior Cat

The 8 Benefits of Adopting a Senior Cat

Giving an animal the chance to live in a home full of love is something really wonderful. Adopting a senior cat has many benefits for our lives! 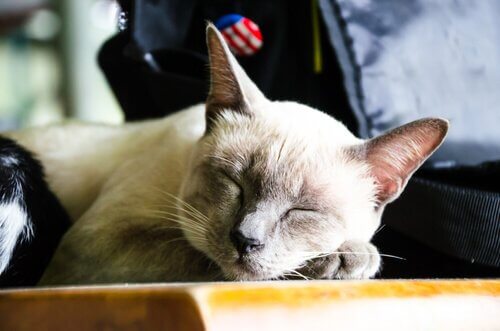 Giving an animal the chance to live in a home full of love is something really wonderful. A pet is the best gift we can receive no matter how old we are. While most people may choose a puppy or a kitten, adopting a senior cat can be more than just beneficial. And it goes both ways, for the cat and for yourself. In this article, we’ll tell you about the main benefits of making this decision.

Why adopt a senior cat and not a kitten?

Unfortunately, young kittens are the first to be adopted from animal shelters. People believe that, this way, they’ll be able to “raise them to their liking” and thus have a pet for a longer period of time. However, adopting a senior cat has its advantages as well:

1. There will be no surprises

When you adopt a senior cat, you already know how big it’ll be and what kind of personality it’ll have. Kittens can be very cute in their first months of life, but then they change their character and grow. If you’re looking for a quiet or calm pet right from the start, then choose an older one.

Sometimes we think a senior cat must be in a refuge because it’s aggressive, attacks often or doesn’t get along with people and other animals. But, in most cases, they’re there because their owners died or had to move.

It may also be because they were lost or abandoned, or, sometimes, it’s because their owners developed allergies or became pregnant. But, there’s no reason why we should think that it’s the animal’s fault.

3.  They won’t destroy your house

One of the most common problems for those who adopt kittens is that once they get home, they’ll attack the furniture, clothes, or shoes. We can’t understand how such a cute little ball of hair can break everything, but they do! On the other hand, an old cat is much calmer, and it doesn’t have enough energy to destroy your personal belongings. In other words, you won’t have to worry about it!

It could be said that there’s a kind of symbiosis between pets and their owners. In many cases, they can complement each other. In others, they need to be similar in order to get along better. If we have the idea of adopting a cat to accompany an older person, then we must choose an animal that has reached at least 5 years of age.

Why is that? First of all, because they’re calmer and don’t break things anymore. Secondly, because the senior person doesn’t have to worry so much about the pet’s care. And, thirdly, because they may live the same number of years together.

5. They’ve already learned everything they need.

When we have a baby kitten, we must teach them certain “family rules” and how to use the litter box. Older pets, on the other hand, already know where to go and how to behave at home. Even if they have some behavioral “issues”, it won’t be because of your training, but because of what they learned with their previous owners.

6.  They are grateful animals

Like many adult cats that enter a shelter, they’re often not fortunate enough to be adopted. Choosing to take a senior cat home will make you its superhero. They will be forever grateful to you, and you’ll witness a resounding change in their life. Undoubtedly, you’ll see that change in yours too.

At Christmas, many shelters get parents that are interested in adopting a pet as a gift for their children. Unfortunately, the “excitement” ends a few months later, when they get bored with their “new toy”.

On the other hand, an adult cat will teach the little ones about fidelity and love, as well as helping them to behave better and stay out of trouble.

8. They can spend many hours alone

If you work all day, you won’t have time to take care of a pet, especially if it’s a puppy or a kitten. Adult cats hardly need any care or attention, and they appreciate spending time alone because they feel calmer and can sleep at ease.

Still undecided about whether to adopt a senior cat?

Older Cats: 5 Tips for Taking Care of Older Cats
Caring for older cats requires special attention and extra responsibility. It isn't always easy, but we'll give you tips for how to care for your older cat. Read more »
Interesting Articles