Dogs have retinas with more cones than rods, which helps them see better than us in the dark. 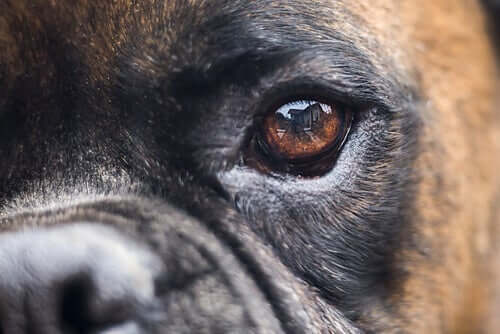 If you’ve ever taken a photo of your dog or looked closely at them at night, you might have noticed that their eyes glow in the dark, perhaps due to the flash of your camera. This happens as a result of pupil dilation in dogs. Read on to find out more!

Dogs’ eyes are usually beautiful and intense during the day, but at night they seem to change. They emit a green, or sometimes yellow or purple glow, which many people find surprising. What makes this phenomenon happen?

Before we go into why this happens, we need to go into a little more detail about the canine eye.

The retina, which is the back of the eyeball, is partly made up of rods and cones, two types of cells which are highly sensitive to light. The cones perceive color and a clear image, whilst the rods perceive movement and are very sensitive to low light.

The canine retina has more cones than rods, which helps them to see better than us in the dark. However, they still have fewer cones than we do, which means that they can’t see colors with the same range and intensity that we do.

Light enters through the pupil, which dilates. From there, it reaches the lens. The larger the lens, the more light it’s able to absorb.

The reason for pupil dilation in dogs

To understand why dogs’ pupils dilate and why their eyes glow in the dark, we can look a little at the composition of their eyes.

According to renowned ophthalmologists who specialize in the study of animal eyesight, canine eyes react to light differently to ours. This is because they have a light-reflecting surface known as the tapetum lucidum, which is located between the optic nerve and the retina.

The tapetum lucidum acts as a mirror that reflects light and sends it to the rods and cones so that they can absorb it in low light, particularly at night.

Dr. Miller from the Animal Ophthalmology Clinic in Memphis explains it as follows:

“This is an adaptive feature in animals who tend to be hunters at dawn and dusk. The eyes of these animals are geared for low-light vision. They include dogs, cats, cattle, deer, horses, and ferrets. However, humans and primates don’t have the tapetum lucidum, and neither do squirrels — because they’re more active during the day, their retinas are designed for brighter light vision.”

Why do their eyes shine a different color?

When we see pupil dilation in dogs, they can glow different colors. This happens as a result of the amount of zinc or riboflavin present in the tapetum lucidum. The amount that’s present will determine the color that their eyes reflect.

Another influential aspect is the color of the dog’s fur. For example, white-haired dogs with light eyes usually have a reddish glow to their eyes, while the eyes of dark-haired dogs typically range from blue to purple.

Age is another influential factor since the lenses thicken and perceive less light. This can alter the color of the shine in their eyes.

According to experts, all dogs are born with a tapetum lucidum that ranges from blue to purple, although this can vary after 16 weeks. That’s why some dogs’ eyes glow yellow or green. There’s no specific rule in this regard.

Have you ever wondered about pupil dilation in dogs and why their eyes glow in the dark? Well, now you know!

Why Dogs See Invisible Doors
Sometimes, our pets stop at the threshold of a door. Would you like to know why dogs see invisible doors? Find out in this article! Read more »
Link copied!
Interesting Articles
Dogs
7 Causes of Suffocation in Dogs