The Dangers of Leaving Your Dog Tied Up

A dog that is frequently left tied up can quickly start to show signs of behavioral issues, such as biting anyone that gets too close or compulsively chewing their own tails. Long-term, it can even change their overall temperament, and leaves them exposed to the elements. 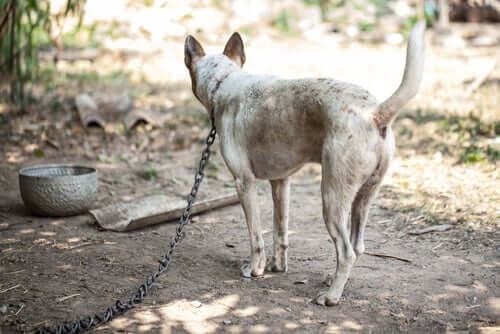 Keeping a dog tied up all day is animal abuse, even if your intentions are essentially “good”. In this article, we’ll tell you about the dangers of keeping your dog tied up.

A chained dog is an unhappy dog

If you pay close enough attention, you’ll find that your dog talks to you without saying a word. When they don’t like something, it shows on their face. When they’re sad, you can see it in their eyes…

People decide to tie up their dogs for a whole range of different reasons. Some people don’t want them in the house, and prefer to leave them out on the patio. Others don’t want their dog digging up the garden and destroying the plants. Or maybe the dog has a tendency to escape through gaps in the fence (or because there is no fence).

Having to resort to keeping a dog tied up may also be the result of poor or insufficient training as a puppy. The owners prefer to tie them up rather than make the effort to train them or try to modify bad behavior: excessive barking, fights with other pets etc.

Some people even believe that it’s best to keep them tied up during the day, and release them at night so they can act as guard dogs.

The effects of leaving your dog tied up

Although many owners may claim the opposite, a dog that is left tied up all day does not usually receive the attention it deserves. For example, they often don’t drink enough water. Their water may run out or dry up in the sun, or it might stagnate and become full of flies.

Dogs that are left tied up are also exposed to the elements, when there is a house just feet away. Exposure to the sun, heat, rain, snow and cold can have serious consequences for their health.

Even if you have them on a long leash, being tied up means your dog can’t run freely. For dogs, just like people, lack of physical exercise can be really damaging for their health.

Furthermore, if the chain or rope becomes too tight, it can cause wounds to their neck, which can become infected if left untreated. But there’s an even more serious danger. If the animal tries to go further than the rope will allow, it can even strangle itself.

How does being tied up affect a dog’s mental state?

Animals need their freedom, even those that have been domesticated over thousands of years. Being tied up and allowed only a minimum range of movement can have a huge impact on your dog’s behavior and temperament.

Firstly, dogs are social animals, and need the company of other animals (their pack). If they are isolated and tied up far from the house, they’ll think they’ve done something wrong, and will quickly become sad or depressed.

Leaving your dog tied up all day can make it feel stressed and anxious. It may even become dangerous, displaying high levels of aggression toward any human or animal that gets too close.

Some animals even start to show signs of psychological issues, and may compulsively chew their tail or paws. And if you think that tying up your dog will make it easier to train, then you’re very much mistaken. They’re actually far less likely to obey commands.

Whether it be a German Shepherd or a Dalmatian, keeping your dog tied up and isolated is one of the worst things you can do to your pet. For your dog, it will seem as if they have been banished from their pack, causing frustration, suffering, anger and confusion. Remember, for a dog, being part of a pack is one of the most important things in their life.

Dogs Can Also Be Victims of Domestic Violence
Violence against women is a problem recognized the world over. But did you know that animals can also be the victims of domestic violence? Learn more here! Read more »
Link copied!
Interesting Articles
Dogs
Dog-Friendly Movie Theaters