The Importance of After-walk Rewards or Treats

Rewards, both in the forms of food and caresses, are suitable to facilitate the teaching and training of a dog's behavior. 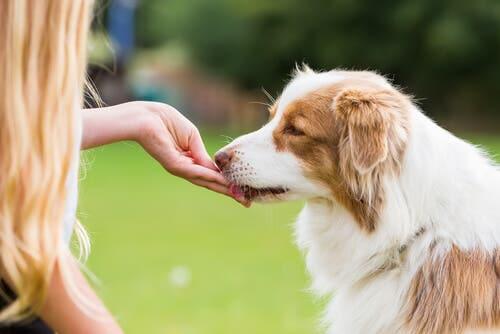 After-walk rewards or treats are an important detail that is sometimes overlooked by many. If a dog is adequately rewarded for its behavior, it will repeat it in order to receive the same kind of recognition.

If you want to know what rewards you can give your dog after a day of physical activity or when to do it, we encourage you to continue reading.

What treats to give my dog as an after-walk reward?

Once you have returned from the walk, the pet should receive a reward. This incentive will be given to them if they have behaved well during the activity. It’s also suitable for you to have a moment to allow the cleaning of your pet as soon as you get home. This reduces the risk of spreading whatever the pet has brought from outside into your home.

One question that may arise is what kind of reward to give your pet. Here are some possible options:

This is usually the most given treat for rewarding pets, especially when they are small and are still in the learning period. For this reason, the market offers a large selection of products. You can choose natural or more processed options. In addition, some natural treats you may already have in the kitchen are slices of melon, banana, or carrots, among others.

There are also different types of candy you can offer them depending on the dog’s age. A puppy cannot eat the same as an adult dog or an elderly dog. So let’s bear that in mind.

These kinds of treats are very practical when you’re training the animal. This incentive will make your pet perform a specific action or behavior quicker. However, it isn’t recommended to use this type of reward for dogs with weight problems. It’s best to use other types of positive reinforcement such as caresses or verbal expressions, as it isn’t appropriate to promote a link between food and an animal when it already has eating problems.

Usually dogs love all the caresses that their owners give them. Therefore, they’ll usually ask for them by making small gestures such as gently pushing with their heads or touching the person’s body with their tail. As a result, the animal’s attention can be used to educate them. Thus, caresses can be a positive reinforcement that motivates dogs to obey and learn.

Verbal recognition is also a type of positive reinforcement. Therefore, it’s recommended to reward the dog with meals or caresses accompanied by words of encouragement or satisfaction. Dogs are able to recognize the tone and mood of their owners or tutors, so they’ll interpret a happy tone as a huge incentive.

Dogs have a lot of energy that they have to use up through different activities. These include physical activities such as walking or games that contain positive reinforcements. In this way, the animal can be ordered to perform an action, like to sit down for example. If they do it correctly, you can reward them by playing a game with them or taking them for a stroll out at the park.

A known fact is that every learning process requires dedication and repetition over a certain period of time. Therefore, you can’t expect the animal to learn everything in five minutes.

Why should I give them after-walk rewards?

Dogs are animals that learn concepts on the basis of repetition. If, after executing an order such as “quiet”, you offer them a reward, they will assimilate that behavior. However, the reward types need to be changed little by little.

Initially, the reward is usually a treat or a prize. Over time, you should space out the rewards and replace them with gestures or words, although you can repeat them again from time to time. Thus, the animal will end up obeying because its owner instructs it, and in this way it will associate its proper behavior with an incentive, whether it be caressing or words of encouragement and recognition.

For that reason, treats are quick and easy to manage. It’s a way to reward your dog for an action performed immediately as well as a great after-walk incentive.

What shouldn’t we do?

The world of dog training requires time and determination, but with treats and affection given as after-walk rewards, the animal will quickly learn to follow the tutor’s orders.

When Should We Give Dog Treats?
Dogs can get excited about a number of things. One of these things are treats! But when should we give dog treats and when shouldn't we? Read more »
Link copied!
Interesting Articles
Dogs
The Dogs that Protect Wild Animals