The Most Common Ferret Diseases

This pet needs a lot of care in terms of health. In fact, some vets specialize in ferret care. Some diseases can be fatal. 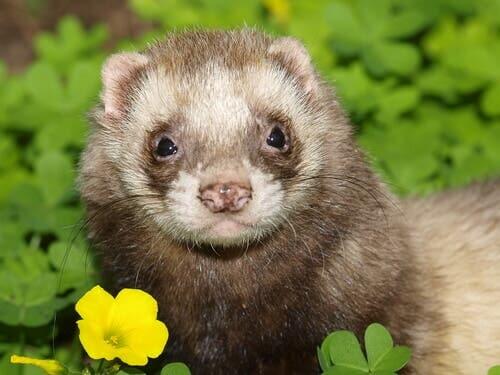 One pet that’s gaining popularity throughout the world is the ferret. This friendly mammal needs certain special care regarding their health. So in the following article, we’re going to tell you about the most common ferret diseases so you can treat them in time.

What are the most common ferret diseases?

Although these animals were domesticated thousands of years ago to hunt rabbits, ferrets only recently became pets. In fact, some eccentric celebrities chose these mammals as pets as if they were dogs. Ferrets are usually around 20 inches long, and weigh less than 5 pounds.

However, one reason this species has become popular is how peaceful they are when they sleep. They sleep 18 hours a day. Ferrets are also very sociable creatures. They love to play. As a result, these animals have become popular pets in recent years.

In turn, this has led to veterinarians becoming better prepared regarding their health and care. So let’s take a look at the most common ferret diseases:

The most frequent parasites in ferrets are giardia and coccidia. These cause vomiting, diarrhea, and loss of appetite. Treatment includes antiparasitic drugs that are usually for treating cats. However, your vet will prescribe a lower dosage. You should always consult the vet about the appropriate amount.

This is a disease that appears in young females up to two years old. It’s characterized by excessive production of estrogen, caused by continuous heat. This can cause aggravated anemia if not treated early.

This is a disease the affects mammals’ ears, and ferrets are no exception. It’s produced by a particular species of mite. When pets suffer from ear scabies, their wax production and itchiness of their ears increase.

You can tell if your ferret has ear scabies if the animal moves their head side to side, scratches itself with its front legs, or rubs itself against objects. Your vet will probably prescribe an antiparasitic for cats. However, it’s very important to tackle this disease quickly to avoid ruptured eardrums or severe ear infections.

Another of the most common ferret diseases is distemper. This is also a common disease with cats and dogs. Animals usually contract this disease from other pets. Unfortunately, distemper can be fatal.

However, you can prevent this disease with a vaccine that a vet will give your ferret at eight weeks of age. Then, they will give your pet a booster dose every year.

Sarcoptes scabiei mites cause this skin disease. You can easily recognize the symptoms of mange. The symptoms are abundant itching, scabs, and loss of fur.

You probably will see your ferret continually scratching. In fact, in some cases, they may even hurt themselves with their claws or teeth. The treatment will depend on how advanced their condition is.

This is one of the most dangerous ferret diseases. It’s also dangerous because it can be spread to other pets in the house, as well as family members.

As a result, the best way to avoid this disease is through vaccination. A vet should be given another dose annually.

Rabies is spread through contact with another infected animal. However, you can also see this disease in ferrets that were born and lived for a few months in the wild.

Vets can treat most common ferret diseases with antibiotics, antiparasitics, or vaccines. However, there are other diseases that occasionally affect ferrets:

This is a tumor in the pancreas. An increase in the production of the hormone insulin causes this type of tumor. However, it’s important that you take your ferret to the vet for proper testing to determine if they have this disease. Then, a vet can help you determine the best treatments available.

This disease can appear in sterilized ferrets. In males, it causes complications when urinating. In females, there’s inflammation of the vulva. Excess production in the adrenal glands can unbalance the ferret’s metabolism and cause other diseases.

The Best Environmental Enrichment for Your Pet Ferret
Environmental enrichment is very important for the well-being of a pet ferret. Learn about these hacks that'll make you ferret happy! Read more »
Link copied!
Interesting Articles
Ferrets
Tips for Playing with Your Ferret

Ferrets
Considerations Before Having a Ferret as a Pet

Before having a ferret as a pet, there are many aspects you need to take into consideration. These include the…

Ferrets are small carnivorous animals, usually weighing between 2.5 and 5 pounds. They make great pets and are typically very active and highly curious. They sleep for many hours a…

Domestic ferrets have become popular pets in recent years. Nowadays, you might even see owners taking their ferrets out for…

Ferrets
Ferret Behaviors: What You Need to Know

Ferrets have been recently introduced to people's homes as pets. They stand out because they’re small, social, and fun mammals.…