How to Regulate the Nitrogen Cycle in Your Aquarium

Establishing the nitrogen cycle in your aquarium is crucial to the life of your fish. But to regulate it, byou must first undertand it. Here, we'll tell you everything you need to know. 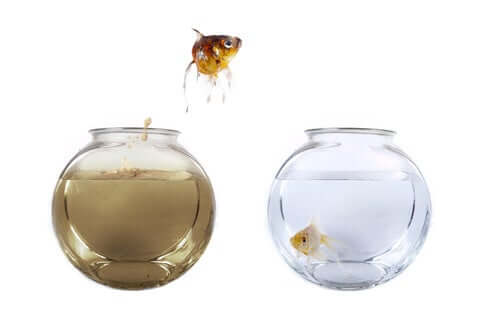 You’ve bought a new aquarium, you’ve installed it in a corner of your home, and it’s already full of water. You might be asking yourself What next? Is it time to put in my fish? Stop! If you add your fish now, they’ll all soon be dead. Before you put a single fish in your new tank, there’s one very important thing you need to do: regulate the nitrogen cycle.

For beginners, the nitrogen cycle is considered the most confusing part of installing and maintaining an aquarium. But don’t worry, we’ll help you gain the understanding you need.

What’s the nitrogen cycle in an aquarium and why is it so important?

Perhaps you’ve never even heard of the terms water cycle, biological cycle, nitrification process, the aquarium cycle, etc. But don’t let all these terms confuse you, they all refer to the same thing: the nitrogen cycle.

But before we begin explaining how to establish yours, you first need to understand what’s going on.

Unfortunately, fish don’t have toilets. Therefore, all of their solid and liquid waste ends up in the same water they’re swimming in. As the amount of waste increases, ammonia releases into the water. And ammonia is a toxic substance that will kill your fish. But fortunately, nature is on your side. The nitrogen cycle will keep your fish from meeting this tragic end.

The stages of the nitrogen cycle

This natural process consists of three steps that promote the presence of beneficial bacteria (good bacteria) in your aquarium. And this will keep the fish in your tank safe from toxic ammonia.

In aquariums, waste decomposes into ammonia, nitrite, and nitrate, as you can see in the following diagram.

Feces, urine, and food leftover from the fish, and plants all emit ammonia as they decompose. At the same time, this substance will continue to accumulate in the tank, reaching fatal levels. That is, until a beneficial bacteria that will eat it abound.

These bacteria appear naturally in aquariums on their own. And once they are sufficiently abundant, they can eat the ammonia as quickly as it appears.

As ammonia levels in a fishtank begin to decrease, levels of another toxic substance begin to grow. This is due to the fact that the bacteria that eat ammonia release a new chemical substance: nitrite.

Just like ammonia, nitrites are highly toxic for fish. But don’t worry, as nitrite levels increase, another kind of bacteria will appear in your tank. And what’s their favorite food? You guessed it! Nitrites.

Once these second good bacteria multiply sufficiently, it can gobble up nitrites just as fast as the other bacteria produce them.

As nitrite levels reduce in your tank, the levels of yet another substance increase. This is due to the fact that the bacteria that eat the nitrites release another chemical: Nitrate.

Nitrate is the final product of the nitrogen cycle. Fortunately, nitrates are relatively unoffensive for your tank–at least in small quantities. But as they begin to accumulate, they can become toxic to your fish.

Fortunately, you can reduce the number of nitrates to inoffensive levels by changing the water. In fact, this is one of the reasons you should regularly change the water in your aquarium.

The reason why there needs to be a nitrogen cycle in your tank is in order for these two beneficial bacteria to grow to the point where they can eliminate the harmful ammonia and nitrites as quickly as they produce.

The nitrogen cycle is continuous. Even if you can’t see it, this cycle occurs constantly in your aquarium, and is what keeps your fish safe from harm.

How to establish and maintain the nitrogen cycle in your aquarium?

In a live aquarium, this cycle establishes itself over time. In general, it takes up to three months before an aquarium has the full capacity to convert waste into nitrate.

The best method for establishing the cycle in your aquarium is by adding fish gradually, rather than all at once. You should start with smaller fish to allow the bacteria that convert nitrogen to grow. From then on, your tank will be able to keep up with the gradual increase in waste.

The beneficial bacteria grow on any surface of the aquarium and concentrates on the sponge or a filter that has a high surface area. It’s for this reason that you should avoid completely washing your tank, as this will eliminate your precious beneficial bacteria.

Rather, you should perform partial changes of your tank’s water–approximately 10% of its volume, once a week.

Fish Tank Maintenance in the Winter Season
Fish tank maintenance in winter is key for maintaining the health of your animals as colder temperatures arrive. So, here are five tips for it. Read more »
Link copied!
Interesting Articles
Fish
The 5 Most Beautiful Fish in the Animal World