Mexican tetra fish are capable of regenerating their own heart tissue after an injury. Understanding this process may be the key to ending many heart-related human pathologies. 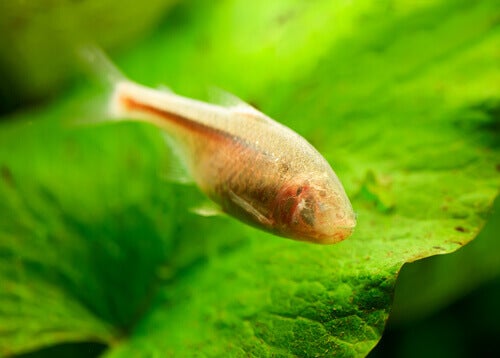 Nature is full of fascinating processes that are often hard to believe. In fact, most animals have an arsenal of seemingly impossible survival tactics that involve regeneration, and some go as far as fully restoring lost limbs. Thus, evolution has allowed us to maximize our chances of reaching the next reproductive stage. For example, there’s a fish called the Mexican tetra which has the unique ability of being able to repair its own heart tissue.

This small, apparently fragile, fish hides secrets that even scientists haven’t been able to decipher. Indeed, they could be the answer to multiple heart pathologies in humans. Continue reading to learn more about this fascinating animal species.

Characteristics of the Mexican tetra fish

Before focusing our attention on its miraculous regenerative power, let’s describe this animal:

This habitat differentiation, estimated to have happened over a million years ago, involves more essential evolutionary changes than mere bodily variation.

The secret of regeneration in Mexican tetra fish

The Mexican tetra is capable of regenerating its own heart tissue after severe damage to it. This fact is surprising on its own, but there’s more. (It turns out that depending on the morphotype, the regenerative capacity may be present or lost.)

These discoveries lead us to think that this gene may hold the secret to heart repair in the event of injury. The good news doesn’t end here though; this feature is also present in both mice and humans.

So, what are scientists doing with all this knowledge?

It turns out that, in addition to the previously named gene, three other DNA regions were involved in the animal’s heart tissue regeneration process. Once this fascinating process has been broadly described, it’ll be time to fine-tune and detect the exact genes that differentiate simple scarring from full regeneration.

This type of research is essential to help us understand the world around us, but it can also have direct health benefits. Humans get much of their inspiration in the rest of the animal world. For example, our airplanes’ structures have a bird-like aerodynamic shape. So, it’s no wonder we also look to animals when it comes to looking for cures to common pathologies. Nature is wise and if we spend time trying to understand it, then we’re sure to come up with many beneficial solutions.

The Most Common Fish Diseases
IF you're thinking of getting an aquarium, there are few things you should learn about first. One of these things is what the most common fish diseases are. Read more »
Link copied!
Interesting Articles
Fish
The 4 Types of Substrate for Aquariums