Sexual dimorphism happens when the physical differences between males and females of the same species are evident. Sometimes they appear in their in size, and others have to do with the aesthetics of the fur or plumage. 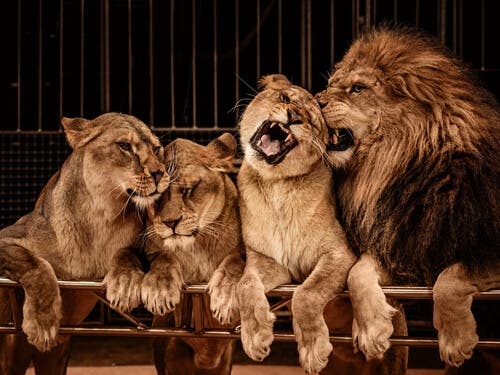 A lion and a lioness don’t look the same; a male deer has antlers and the female doesn’t. A male peacock has bigger and more colorful feathers than a female of their species. All these differences are what scientists refer to as sexual dimorphism. Continue reading to find out more about this subject.

Firstly, let’s define what sexual dimorphism is: the set of variations in the external appearance between the male and female of the same species. Most animals, including humans, have differences in size, shape, colors, skin, etc. This is because these traits help us identify one another.

There’s sexual dimorphism in most animal species. However, the differences in some of them are more subtle than in others. It’s also good to clarify that females are usually larger than males in the case of birds of prey, reptiles, amphibians, spiders, and insects.

This difference is the other way around in mammals and some birds, though. That is males are larger and have preponderant characteristics in relation to females. For example, the mane on a lion or a cock’s comb.

Human beings are also within the group of species where there’s sexual dimorphism. Men and women don’t have the same hip-width, nor the same breast size. Furthermore, as with other mammals, the visible reproductive organs vary depending on the sex of an individual.

The size or certain characteristics that males and females have are determined by their habits. For example, male deer are equipped with their typical horns to fight their counterparts during the mating season. The one who prevails gets to mate with the females of the herd.

In the case of birds, dimorphism appears in the colors of their plumage. This is because the males attract the attention of the females this way. In addition, it also makes sense for mothers not to be as showy when they hatch their eggs in their nests, as predators could see them otherwise. Here are some examples of sexual dimorphism in animals:

This animal is one of the largest predators in Africa that presents a rather pronounced dimorphism. The male mane is a distinctive and unique trait in lions.

It helps them appear larger than females and this is helpful when they have to protect their pride and prevent others from taking away their food. Testosterone, the male hormone, promotes the growth of mane.

This bird is highly admired for its beauty and known for the multicolored feather fan that is present only in males. Male peacock specimens are larger.

Their plumage is blue on the chest and head, gray on the beak, and green with yellow on the tail. They open it during courtship.

In this case, sexual dimorphism is the opposite of the previous examples. Females are larger than males. These, in turn, are more sedentary and need a larger body to be able to maintain the eggs in proper shape during their development.

Males are more agile, have a shorter life, and only exist to copulate and reproduce.

The males of this Asian freshwater fish – specifically from the Mekong River basin – have a long tail known as a “veil” of different colors. Note that the females don’t have this trait. When a male specimen finds a possible mate, he dances around her and flaps his tail and fins to get her attention.

However, this characteristic isn’t only reserved for mating, they also use it to fight other males who try to dispute a female. One of the peculiarities of a Siamese fighting male fish is that he can be quite aggressive – hence the name – with his male congeners.

The Characteristics of Howler Monkeys
In today's article, we'll tell all about the characteristics of howler monkeys, who are known for the loud calls that they use to warn off rival groups. Read more »
Link copied!
Interesting Articles
Animals
How Much Medicine Should You Give Your Dog?