Leks are mating arenas where males show off their strengths in order to attract females, in many cases putting their lives at risk. This is a type of sexual selection. 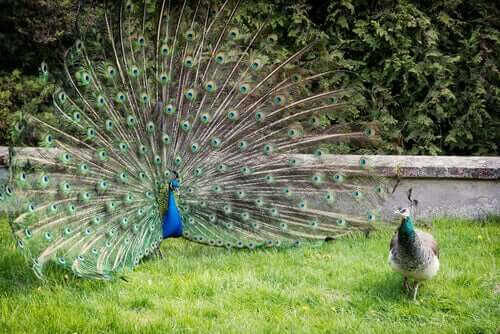 Nature is a severe and unrelenting environment. Success in the animal world comes hand in hand with an inherent risk, also known as a trade-off or compromise. One of the forces of selection that defines nature is “sexual selection”.

Below, we’ll take a closer look at these terms and how much they have to do with reproductive suffering in the animal world. Both natural selection and sexual selection play an important role in an animal’s capacity to produce descendants, which is its ultimate role in life. Therefore, there are a variety of strategies that exist in nature in order to maximize the attention of females.

Successful males will pass their genes onto future generations. However, success, in many cases, means having to put their life on the line in order to find a mate.

Many animals are willing to do anything for sex

Sexual selection acts upon an individual’s ability to reproduce. This force is so strong that it can work against some animals’ chances of survival. One example we all know very well is the case of peacocks. These birds show off their extravagant and colorful tails in order to win over potential partners. However, when they put on this flashy show, they also increase their risk of being spotted and killed by a predator.

This isn’t the only way that males in the natural world express their interest and availability to females. In nature, we find everything from “wedding” gifts to the building of colorful nests. But, what happens when males actually compete face to face in order to win the affection of their love interests?

The term “lek” alludes to a physical place where groups of males of the same species come together to attract females. And the same term refers to the behavioral displays that these animals put on. Leks are especially typical in birds, although we can also find examples of this type of sexual selection in mammals, fish, amphibians, and insects.

In these arenas, males adopt a hierarchical order. The alpha male occupies a central area that offers the best vantage point and defends just a few yards of territory. The rest of the males form groups according to their strength, with the weakest males defending the areas that are least attractive and have the poorest visibility.

Once the animals have chosen their terrain, it’s time for the battle to begin. Males start to put on their shows and dances, with different movements, songs, and calls. The purpose behind the event is the capture the attention of potential female mates.

Of course, there’s a high price to pay. In the case of the capercaillie (Centrocercus urophasianus), studies have demonstrated that the energy an animal exerts increases in a linear fashion according to the frequency of dances and shows. The males that mate the most are also those that move the most. Therefore, every bit of effort increases an animal’s chances of success.

A matter of genes

Females peruse these leks as if they were out shopping. But, how do they end up choosing their mates?

We can sum up preferences in the natural world in one simple word: genetics. The males that are most visible and that make the biggest effort through its movements and exhibitions send a clear message. It’s as if they’re saying, “I’m stronger than the rest”. And, in doing so, they activate the process of sexual selection.

Studies have shown that, in black grouses (Lyrurus tetrix), a correlation exists between a male’s stamina and his chances of survival. So, the choice seems simple. Females choose males that attract the most attention because they have the strongest genes. This gives the couple’s offspring the greatest chances of survival.

Females have a very clear objective. This is to obtain sperm from the dominant male and leave as soon as possible. Then, they take sole responsibility for their offspring. Therefore, the strategy of leks as a means of sexual selection exists only in species where males don’t care for their young. Females get nothing out of being faithful to their mates since they won’t contribute to the upbringing of their offspring. So, females can search for the best candidate and then abandon him.

Leks of the grasslands of the United States and Europe

All of this information may seem a bit foreign to many of us. After all, this behavior is typical of animals that live in the tropics and the savanna. However, this sort of sexual selection also takes place in American and European grasslands. For example, we can mention the greater sage-grouse of the United States (Centrocercus urophasianus) and the great bustards (Otis Tarda) of Europe.

Let’s take a look at bustards. These animals use just one method of courtship, which we can observe in the short dry grass of Spain’s central plateau in March.

Males show off by swelling up their throats, hiding their heads, and ruffling their feathers, performing cyclical movements. This reproductive behavior is truly fascinating and, what’s best is that you can witness it first hand. Of course, you should only do so under the supervision of experts in wild fauna.

Sexual selection is a force the conditions everything

Sexual selection is a force that predetermines the ways and behavior of all wild animals. Therefore, in nature, we find so many strange forms, bright colors, and noisy mating calls. The process is based on intraspecies competition or, in other words, between males of the same species. And its ultimate purpose is to produce the maximum number of descendants possible. Those males that risk the most have the best chances of success, but they also expose themselves to predation.

Leks are a clear example of the forces of sexual selection. By showing themselves off as if they were in a store window, they clearly demonstrate that the animals that put on the greatest spectacle will pass their genes onto future generations.