Razor clams are one of the most common and highly valued mollusks by cooks and foodies around the world. 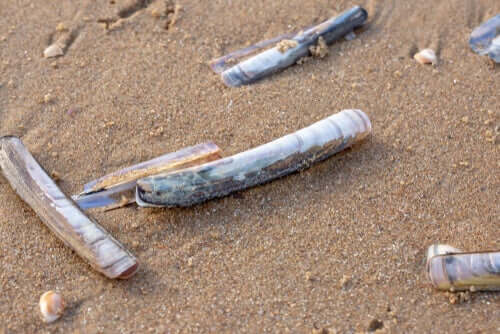 With their characteristic shape and recognized culinary value, most people are familiar with razor clams. They’re commonly found in most of the planet’s seas and oceans and are the main topic of this post.

What kind of animals are razor clams?

Razor clams are invertebrates that belong to the mollusk family, one of the biggest animal groups. There are around 100,000 species within this group, which are present in almost all areas of the planet. This doesn’t include any extinct species.

Within the mollusk family, the razor clam falls under the Bivalvia classification. Its name refers to the species’ most notable characteristic. These clams have a pair of plates or shells that form a razor-shaped outer layer to protect their soft body.

However, a distinguishing characteristic of these clams is that they neither have tentacles nor a distinctive head. All bivalves are aquatic animals, so they have adapted their behavior and feeding habits to marine life.

“Razor clam” is the general name given to mollusks of the Ensis genus. There are 13 species commonly referred to as razor clams, razorfish or pod razors. Their name refers to the similarity between the shape of their shells and that of a razor knife.

Although the mollusks’ shape can vary slightly depending on the species, they are usually between 3 and 8 inches long. Their shells, also called valves, are long, symmetric and can be a variety of colors, from blue-white to brown. However, the shells aren’t usually a consistent thickness, so they can break easily.

In addition, razor clams are unisex, which means that fertilization takes places outside of the organisms’ bodies. The clams release the eggs and the sperm into the surrounding environment, where fertilization later takes place. As a result, the larvae float in the water until they reach adulthood. They then move down to their natural habitat, the seabed.

The ideal habitat for razor clams is the seabed, especially if it’s not too deep. In fact, they’re commonly found on Mediterranean beaches, in the Atlantic Ocean and the North Sea.

These clams use a special burrowing technique to dig themselves into the seabed. They utilize their long and powerful foot to create a small vertical hole in the bed. When the hole starts to fill back up with sand and water, the clam very quickly places its whole body, valves included, into the hole. It then buries itself completely. This helps the clams to avoid any unfortunate encounters with their predators.

All razor clam species, no matter their habitat, feed on the same thing: plankton. Plankton are a group of aquatic, free-swimming microorganisms. Clams’ feeding habits are closely linked to the way they bury themselves in the seabed.

As mentioned, clams utilize their muscular foot to dig themselves into the seabed. This generates a flow of water, which clams use to filter food through their gills.

In culinary terms, the meat from these mollusks is one of the most highly valued and consumed, both when it’s fresh and preserved. In many coastal areas, razor clams form a key part of the typical diet. However, the popularity of these clams has a negative side too. The high demand for some species, such as Ensis macha, poses a threat to the conservation of these mollusks.

Characteristics of the Harbor Seal
Despite its awkwardness on land, the body of a harbor seal is naturally designed for swimming. It's also known as "common seal". Read more »

Link copied!
Interesting Articles
Fish
The 5 Most Beautiful Fish in the Animal World