Sea Anemone - The Animal Disguised as a Plant

The sea anemone could be a perfect animal for your aquarium, as long as you're aware their life depends on their symbiotic relationship with fish like the clownfish. Beware that it can be a dangerous predator for the rest of the species in your fish tank, though. 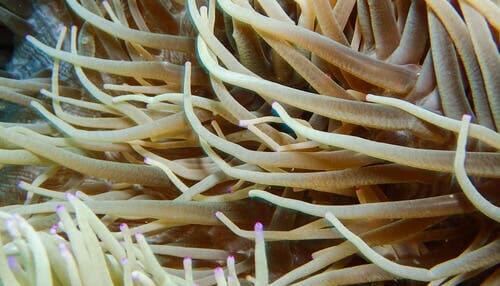 Is the sea anemone a plant or an animal? Well, it’s a combination of both kingdoms. In fact, this is why they attract a lot of attention. In today’s article, we’d like to tell you some rather interesting facts about this marine species. This is because they’re a far departure from the rest.

Characteristics of a sea anemone

This colorful flower-like marine predator lives deep in the oceans. There are about 1,200 species currently out there. The best-known ones belong to the genus Heteractis. This species is also known for its long tentacles.

In addition, the body of a sea anemone is cylindrical and rests on the seabed through a pedal disc — a sort of foot. This allows them to bury themselves in the sand and not be dragged by the currents.

This animal lives in the low tidal areas of all latitudes, including Antarctica and the Arctic. They fold their tentacles and fill their cavities with water to avoid drying out when exposed to air.

As for their nervous system, they’re quite primitive and can only carry out certain processes, such as homeostasis, and movements. Their nerves and muscles are simpler than those of other animals but more complex than corals.

In regard to the reproduction of anemones, they can be either sexual or asexual. Also, they might be single-sexed or hermaphrodite. It all depends on the species. In either case, they expel their eggs through their mouth once they fertilize them.

System of prey and defense of sea anemones

The mouth of this marine animal, in the form of a slit, is located in the center of the body. Also, it’s surrounded by tentacles arranged in concentric rings, always in multiples of six. These possess cells capable of producing paralyzing neurotoxins, used either as a defense mechanism or to hunt their prey.

To detect the presence of food, they use a follicle located at the ends of the tentacles, which releases the venom in a timely fashion. Their prey are any small animals that swim nearby, although they can also eat algae products or little “presents” they receive from other fish.

The relationship between anemones and clownfish

Symbiosis in animals is truly amazing, and this is one of the most representative examples. The popular clownfish who’s orange and white, just like the one in the movie Finding Nemo – is one of the few species who are immune to the poison of the anemone, along with the damselfish.

Both can share the space because they help each other. That is, the fish can hide from predators between the anemone’s tentacles, and the latter receives food from its colorful friends. In addition, the anemone benefits from the oral disc “cleaning service” that takes place thanks to the movement of the fishtails.

Can you have a sea anemone in the aquarium?

It may seem like a good idea to keep a sea anemone as a pet in a fish tank. (Especially in warm water because the sea anemone has a long lifespan and is low maintenance.) However, doing so could alter your artificial marine ecosystem.

You should also know that this animal depends on a stable population of clown or damselfish to survive. In addition, they can be a dangerous predator for the other inhabitants of the tank. This is because they’ll be poisoned and devoured as soon as they approach the anemone.

A sea anemone is somewhat exotic and would be a lovely addition to any fish tank. However, this is only viable if you have a lot of fish they can have a symbiosis with to help them survive.

Why is the Clownfish Orange?
Have you ever wondered why the clownfish is orange? We'll tell you the interesting details behind this unique fish's beautiful coloring. Read more »
Link copied!
Interesting Articles
Fish
The 5 Most Beautiful Fish in the Animal World