Hamsters belong to a subspecies of rodents and there are almost twenty different breeds. However, only five are known as domesticated breeds. 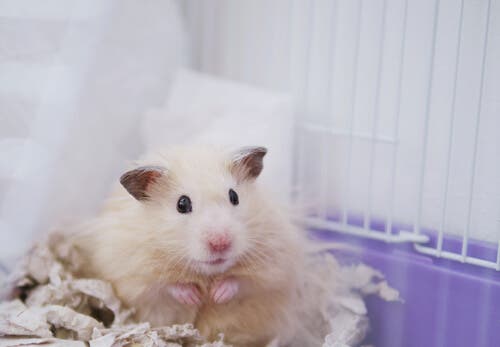 Hamsters are very popular pets, particularly among children. They’re friendly, independent, and easy to care for. However, not many people realize that there are several domestic species of hamster and that each one has a different character.

Characteristics of all species of hamster

Hamsters belong to a subspecies of rodents and there are almost twenty different breeds. However, there are only five which have been domesticated. Most of these come from the Middle East and the southeastern United States, although they have spread as pets all over the world.

Hamsters differ from other rodents in that they have pouches between their cheeks and shoulders. This allows them to store and carry food. When they’re full, it seems as though they almost double in size.

There are various different sizes too. The Golden hamster is the largest, but there are also dwarf varieties. The size difference is so big that Golden hamsters can weigh 6 ounces, whilst Winter White Dwarves weigh just 1.5 ounces.

Hamsters can live for one and a half to three years. There are cases hamsters living up to four years old, but it’s rare.

They’re solitary animals and they don’t need to live in groups, although they can live quite happily with other hamsters in most cases. However, because of the amount they can reproduce, it’s a good idea not to mix opposite sexes.

As its name suggests, the Syrian hamster comes from the Middle East. They’re the largest of the domestic breeds, weighing between 3.5 and 6 ounces and measuring up to 6 inches long.

They’re also commonly called ‘golden’ hamsters because of the color of their coat. However, they can appear in other colors, and there is even a variety with longer hair than usual. They’re quite territorial so they don’t manage well sharing a cage with other animals.

This species of hamster comes from the steppes of Central Asia, particularly parts of China and Russia. They’re half the size of the golden hamster, but they also have smaller, rounder ears.

They’re usually gray with a lighter colored or even white belly. They normally have no problem living in pairs or small groups. Because they’re so small, they’re normally very active and can be quite elusive.

This species of hamster is frequently confused with the Campbell’s Dwarf and also comes from the Russian steppes. However, in this case, they’re native to southwestern Siberia.

As a creature that lives in a very cold climate, they change their coat to a white one during winter. This is to take advantage of the heat from the sun that they receive during the day.

During the summer or warmer seasons, their coat is gray or brown with a slightly lighter belly, and on the back, they usually have a darker colored band.

The Roborovski Dwarf hamster is the smallest on this list, measuring just 3.5 inches long. They also have a very small tail, which doesn’t even get to half an inch in length.

Like other hamster species, they come from the Asian part of Russia, but their way of adapting to the cold environment is to hibernate. But when they’re awake they’re particularly nervous and active animals.

They’re gray or brown in color with a lighter or completely white belly. They also have a small white spot over the eyes and the soles of their hind feet are hairy.

These aren’t dwarf hamsters and are medium in size, measuring between 4 to 5 inches long and weighing between 1.2 and 1.6 ounces. This species doesn’t hibernate, although, in winter, they prefer to be active at night and rest during the day.

They’re usually reddish-brown with a dark line from head to tail, although they can also be white with reddish-brown or gray spots.

Hamsters are very popular pets, especially for families with children. However, they are elusive animals, so they need a gradual, friendly approach to help them get used to humans. Just like any animal, they’re not toys and need to be cared for properly.

Small but Fierce: How to Tame a Hamster
Hamsters can be a great pet for kids, especially in terms of responsibility and cost. Before you buy one, though, learn a bit about how to tame a hamster! Read more »
Link copied!
Interesting Articles
Hamsters and Rodents
Causes, Symptoms and Treatments of Tumors in Hamsters