Animals that Adapted to Extreme Cold

If an animal is to survive it must be able to fit in with the environmental conditions which occur in its habitat. This "fitting in" is known as adaptation. 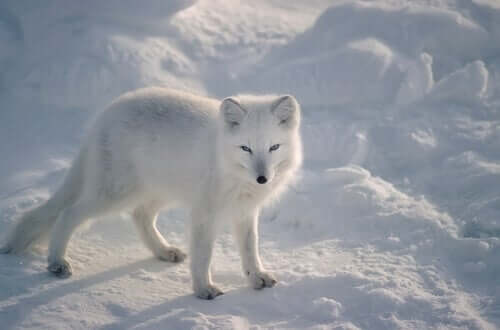 For many animals, low temperatures and snow are part of their normal lives, and they have to adapt to survive. In the following article, we’ll tell you all about animals that have adapted to extreme cold without wearing any extra layers!

Which animals have adapted to extreme cold?

These animals can live in the Antarctic or Arctic Poles thanks to their skin and the amount of accumulated fat. This allows them to withstand the extreme conditions better. Although it may seem that these inhospitable places couldn’t harbor any life, the truth is that there are several animals who have adapted to the environment. Some of them are:

This is the only species of bear with a completely white fur. It’s also the only one that feeds 100% on meat (seals mostly). It has developed paws to be able to walk or swim long distances. Both the ears and the tail are small, to prevent the loss of body heat. In addition, it has a dense coat and a large layer of fat all over its body. Although they don’t hibernate, pregnant females seek shelter during the winter.

The Arctic Fox (or Polar Fox) lives in the North American and European Tundra. It has small ears and a large layer of white fur that allows it to survive temperatures down to -58°F. It does, however, change its color when summer arrives and has a large hairy tail. As for weight, it can weigh up to 20 pounds and remains active all year round (it doesn’t hibernate but migrates to warmer places instead). Its main prey are birds and small mammals.

Of all the seal species, there are only a few that can live in cold climates. One of the most important ones is the Greenland or Harp Seal. Their habitat is the North Atlantic Ocean and the Arctic Ocean. Adult seals have a silver-gray coat with a black face mask and a dark spot on their back. The young ones, on the other hand, have a yellowish-white coat. In addition, they spend little time on land and live in colonies or groups.

The Polar Hare or Arctic Hare is another animal that has adapted to extreme cold. It lives in countries with some of the lowest temperatures in the world: Greenland, Finland, Sweden, Norway, Iceland, and Denmark. Although its fur is white in winter, when summer arrives or it migrates to more pleasant places, it changes its color to a frosty blue. Moreover, it loves to eat shoots, leaves, and berries.

Several of the whale species of the world spend time in cold areas. One of them is the Boreal or Greenland Whale. This whale has a robust body, a dorsal fin, and measures up to 60 feet long. It can also weigh up to 100 tons. However, its population has declined significantly due to whale hunting. They spend their entire lives in the Arctic waters, and their migration periods are rather short. In addition, they swim with their mouths open to filter the krill with their baleens and feed on them.

This flightless sea bird that lives in the Southern Hemisphere is another animal well-adapted to extreme cold. They swim thanks to their bony, rigid flippers. However, their legs are quite far back in their bodies, and so they can’t walk very well on land.

They can swim at almost 40 mph in the sea, however, especially when they’re looking to catch prey. They can also store a good deal of their body heat thanks to their three-layer plumage, a thick fat layer, and their special blood vessels.

This is another sea mammal that lives in the Arctic region. There are three species of walrus: one from the Atlantic Sea, one from the Pacific Sea and a third from the Laptev Sea (Siberian Sea). The second are the largest, but all have a large layer of skin to prevent heat loss.

The males shed their hair in summer, which changes their fur color depending on the temperature and the environment. If they are in the water, the fur becomes whitish or pink. They feed on mollusks, fish, and any small animal that lives in the water.

Finally, among the animals that have successfully adapted to extremely cold environments, we find the Caribou or Reindeer. It lives in the Northern Hemisphere, more precisely in Canada, Alaska, Russia, and Greenland. They have been domesticated in Finland, Sweden and Norway.

The average reindeer can weigh up to 660 pounds. The males live separately from the herd and migrate in packs. In addition, they can walk in the snow easily thanks to their wide hooves.

Probably because of the challenges imposed by these kinds of environments, the number of species that can adapt to life in the polar regions is low, but most of those that do usually occur in large numbers.

The effects of global warming are particularly felt in the polar regions, and this is why many of these species are becoming endangered species. We must become extremely aware of this issue so we can mitigate its terrible consequences as much as possible.

Discover the Truth: Do Cats Hibernate in the Winter?
Have you ever wondered if cats hibernate in the winter? Today we'll take a closer look at seasonal behavior changes in cats. Read more »
Link copied!
Interesting Articles
Mammals
What Are the Differences Between Jaguars and Leopards?