The Most Amazing Mass Migrations in the Animal Kingdom

Mass migrations are an incredibly long and a challenging journey with one goal: survival. 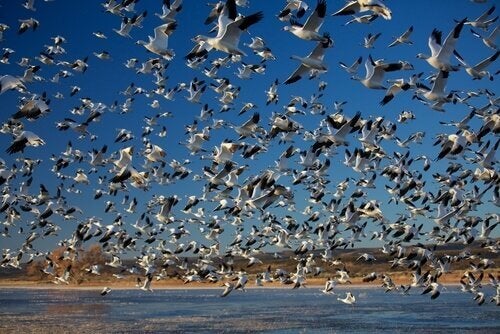 There’s a spectacular phenomenon that occurs in nature and stands out above all: mass migrations. Crossing entire oceans and continents in search of a better climate or food. This is indeed something admirable!

In this article, we’re going to tell you about some of the most surprising mass migrations on the planet. You’ll learn which animals can travel the longest distance, and the migration groups with the greatest number of specimens ever seen.

Birds are the animal species that carry out the most incredible migrations as far as difficulty and distance traveled are concerned.

An example of this is the Arctic Stern (Sterna paradisaea), which ranks first in the longest migration recorded in an animal species. However, this small bird weighs no more than 3.5 ounces and is able to travel up to 44,000 miles.

These birds start their journey in Antarctica. Along their route, they pass through Africa and several regions of South America, until they reach the Arctic. In other words, this long journey can take several days, during which the sterns stop occasionally for food.

Speaking about amazing mass migrations, the Bar-tailed godwit (Limosa lapponica) also deserves an honorable mention. These birds are able to travel great distances, and without stopping even once!

A registered specimen of this species traveled 7,100 miles non-stop from Alaska to New Zealand. This is the longest non-stop flight ever recorded.

Moving on to talk about marine migrations, the prize winners are definitely sardines (Sardinops sagax). Their migration is the largest movement of animal species on the planet. Somewhat similar to the migrations observed from the Wildebeest or Gnu (Connochaetes sp) in Africa, for instance.

The sardines’ journey is more than 930 miles long. This gigantic fish school can measure more than 6 miles long and between 98 and 196 feet deep. These shoals are so large that they can be seen from a light aircraft or boat.

As you can imagine, the magnitude of this massive grouping of sardines attracts a large number of predators. As a result, this causes what is known in biology as a feeding frenzy.

Also noteworthy is the Humpback whale’s migration (Megaptera novaeangliae). These animals hold the record of the longest migration ever found among mammals. They travel from the South Pole all the way to Costa Rica and back. In total, they swim about 10,000 miles.

In this category, the award winner is the Monarch butterfly (Danaus plexippus). Every summer, these insects travel almost 3,000 miles, starting from Mexico and finishing in the Canadian forests.

Some specimens of the Monarch butterfly are even capable of transatlantic migrations. They can be found in some areas of Great Britain and Spain, for instance.

However, dragonflies are the insects that travel the longest distances in total. In particular, the globe skimmer dragonfly (Pantala flavescens), is capable of transoceanic flights. Taking advantage of air currents and strong winds, these animals can travel distances up to 8,700 miles.

Finally, we would like to point out that there are many other migratory phenomena that we haven’t described here. Why don’t you find out a few for yourself?

The Incredible Odyssey of Monarch Butterflies
Monarch butterflies are famously known for their bright colors and the massive migration some of them take to escape the winter. Read more »