Hibernating Animals - How Do They Do It? 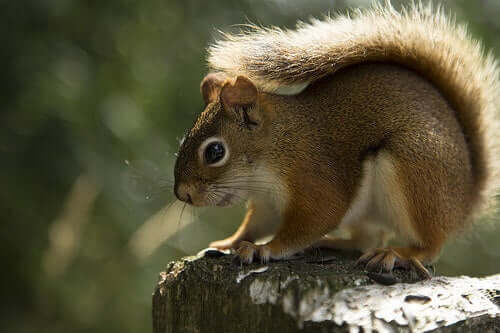 Upon the arrival of winter, hibernating animals take refuge in a cave or inside a tree and sleep there for months. This is what hibernation is about. In today’s article, we’ll tell you how they manage to spend so much time without waking up or eating. We’ll also tell you which animals do it.

Some species must hibernate as it allows them to make it through the winter without having to “worry” about food or bad weather conditions. During this process, their body temperatures drop to very low levels and so does their respiratory rate.

Hibernation periods vary depending on the species — from a few days to several months. Their bodies sustain themselves through the energy reserves they stored during the hot seasons. While this state is common in warm-blooded animals such as bears, there are some cold-blooded animals, such as crocodiles, who also go into hibernation mode.

Mammals must prepare in advance. They fall asleep as soon as the ambient temperature drops, radically decreasing their heart and respiration rates. Thus, their organic temperature drops pretty low.

At first glance, it might seem as if the animal is dead because their skin is cold to human touch. You could try to wake them up, even by making sudden movements, and they wouldn’t wake up.

This kind of winter sleep puzzles scientists and zoology experts. This is because it’s much deeper than regular deep sleeping. For example, their digestion stops and they have no physiological needs such as urinating or defecating, nor are they thirsty, etc. Of course, for hibernation to be successful, the animal must have increased its lipid stores during the summer and part of the fall. And, when they wake up, they’ll be thinner and won’t have a lot of energy.

This state of winter lethargy reduces the animal’s heart rate by 80%, their respiratory rate by 50%, and their body temperature by up to 41°F. When spring comes, everything “returns to normal” and the mating season begins shortly after.

Not all animals have the ability to hibernate, only those in a temperate environment with a clear winter season. Below are some of the species that hibernate every year:

These animals are large and usually omnivorous (except for the polar bear, which is 100% carnivorous). They have short ears and their body is completely full of hair. Interestingly, the bear might be the most “popular” species when it comes to hibernation. This plantigrade can walk on four or two legs and can sleep throughout the winter in a cave.

It may seem weird but “bugs” also hibernate. The best-known ones when it comes to this habit are the ones who are reddish in color. In fact, they dig holes in the ground and feed on food and insects and turn them into fertilizer. Earthworms lower their activity when the ground temperature drops and keep their activity (eating and reproducing) to a minimum.

There are squirrels in many different colors and sizes, but they all have a hairy tail and large teeth. The squirrels prepare for winter several weeks ahead by accumulating nuts and fruits that fall off the trees when fall arrives. They can store hundreds of supplies in their tree burrows.

The reptile process for hibernation is called brumation, and it’s very similar to the mammal process. These animals sub-freeze their blood, fluids and even cells. Thus, they can survive temperatures below zero.

The hibernation period for these flying mammals is 183 days. They do it not only because of the low temperatures, but also because of the scarcity of prey (mainly insects). So, when they’re in this state, their body temperature drops and some physiological and metabolic changes occur.

However, they eat a good amount of food beforehand with the purpose of storing energy. They may wake up periodically (every 10 days) to defecate and urinate, or to move to a more suitable place.

What Are the Differences Between Brown Bears and Grizzly Bears?
Both brown and grizzly bears have such similar characteristics that we often don't know how to distinguish between the two. FInd out how to today! Read more »
Link copied!
Interesting Articles
Mammals
The Role of the Gray Squirrel in Forests