What Are the Differences Between Brown Bears and Grizzly Bears?

Both brown bears and grizzly bears have such similar characteristics that we often don't know how to distinguish between the two. In this article, we'll explain their differences. 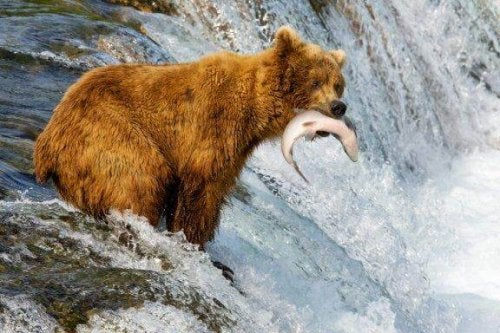 There are so many bear species, but there are two in particular that have amazing similarities, and it’s extremely hard to differentiate between them. Which ones are we talking about? Brown bears and grizzly bears! Read on and learn more about these fascinating creatures.

How did we first know that these were actually two distinct species? Well, a Republican candidate for the United States said that the Russian Bear never dies, he just hibernates. This phrase was repeated throughout Russia, and a foreign spokesperson replied, “except the grizzly.”

Before then, people had just assumed that they were the same species, and that they only had minimal differences; too small to even take into consideration. But this quote started many people thinking. So, what conclusions did they reach?

The brown bear lives in Russia, specifically in forested areas. However, it tries to avoid living in the forests that are farther south. This animal needs the cold, and so it’s always looking for icier habitats to live in.

On the other hand, the grizzly bear is a species of brown bear that’s already considered an independent breed. They live in the United States, mostly in Alaska. They can, however, be found in many natural parks, such as Yellowstone.

Their fur is the first notable difference. Grizzly bears have long fur that’s a grayish color, while brown bears’ fur is short and brown. Also, grizzlies are bigger and stronger and can weigh a ton. This is compared to brown bears, who are smaller and weaker.

Grizzly bears are a little clumsy, but they’re very ferocious. Brown bears, on the other hand, are more agile, calmer and aren’t as strong. Many think of grizzlies as bloodthirsty animals that wipe out any prey that gets in their way.

In fact, the story of Goldilocks is an example of people’s attitudes toward this particular species of bear. There are also many films that exhibit this attitude.

This is totally at odds to the role the brown bear plays in Russian pop culture. Not only do they refer to it in an endearing way, but it’s also part of national symbology. In fact, a brown bear was the mascot of the Russian Olympics in 1980.

Although both are omnivores, there are differences in the food they eat, due to the fact that their habitats are completely different. However, one thing they do have in common is that they love salmon! Just like all bears…

The differences in their diets are also due to the brown bear’s agility in comparison to the grizzly’s more clumsy nature. Brown bears can get to fruit and berries that are high up in the trees, but grizzlies couldn’t even dream of doing that.

Their tail and legs

The grizzly’s tail is much shorter than the brown bear’s. We don’t really know whether this helps them move more easily, but it’s a clear difference that can help us tell the two bears apart.

Their claws are also different at first glance. Grizzlies have long, sharp claws, while brown bears have shorter ones. This may be due to the grizzly’s ability to hunt, and why it finds it so easy to tear its prey apart.

Two animals that seemed so alike, can actually be so different. So, do you think you could tell the difference between a brown bear and a grizzly now?

Breeds of Terriers: 5 terrier breeds and their similarities
People worldwide love terriers. In this article, we'll tell you everything you've ever wanted to know about different breeds of terriers. Read more »
Link copied!
Interesting Articles
Wild Animals
5 Animals that Live in Grasslands