Causes, Symptoms and Treatments of Tumors in Hamsters

Many hamsters have tumors at the end of their lives, although this isn't usually the cause of their death. Unfortunately, the life expectancy of these rodents is quite short. 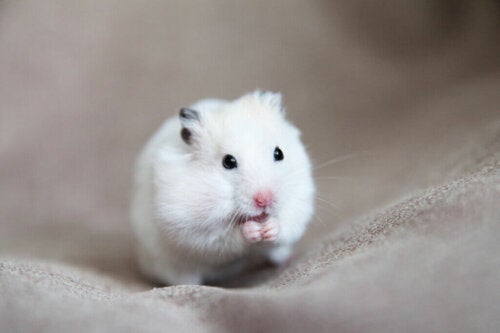 Tumors in hamsters aren’t rare and a high percentage of these animals will have a lump on their body at some point during their life. (Domestic ones live longer than their wild relatives.) You can easily find a tumor on the animal while petting them. Note that it’s a very good reason to consult a veterinarian.

Fortunately, most tumors in hamsters aren’t malignant. They’re actually quite easy to remove and the hamster will recover quickly after. So don’t panic if you find one on your pet, but don’t underestimate it. Continue reading about this condition in these rodents.

Possible causes of tumors in hamsters

As with most animals, the causes of tumors are still unknown. Thus, the lump may be due to multiple factors, or even to genetic reasons.

First of all, you should know that a tumor is an abnormal cellular overgrowth with no apparent purpose. There are two main types:

Fortunately, only 4% of pet hamsters will experience a malignant tumor. For the most part, these tissue masses consist of benign neoplasms that, when in an accessible location, can be easily removed.

In contrast, the most common malignant tumors in hamsters are nodal lymphosarcomas, cancer of the adrenal glands, and uterine adenocarcinomas. Even if reached in time, the chances of survival are minimal in these cases, due to the high metabolic rate of these animals.

Clinical signs to determine if the hamster has a tumor

Benign tumors are easy to detect when under the skin as long as you examine the animal daily and are used to the shape of their body. It’ll be easier to notice any irregularities effectively if you’re familiar with your pet’s anatomy.

Unless they’re in an area that hinders movement, such as the groin and armpits or inside the mouth (which makes chewing difficult), benign tumors are asymptomatic beyond the presence of a suspicious lump.

On the contrary, there’ll be symptoms if the tumor is lodged in any internal organ, be it benign or not, such as the following:

Any of these clinical signs can be due to the development of a tumor. Thus, it’s crucial for you to inform the vet about the general condition of your animal in the weeks prior to the consultation.

There are times when these symptoms are due to other conditions related to hormonal imbalances and not to cancer. Thus, proper veterinary diagnosis is essential in these cases. Try to consult a veterinarian specializing in exotic pets.

Is there any treatment?

As a general rule, removal is the most common treatment for tumors in hamsters. The vet may also do an ultrasound to determine the exact position of the cell mass.

They’ll know whether or not they can remove the tumor once they do. So go ahead and let them remove it as soon as possible to avoid complications if they suggest it.

Vets use anesthesia via inhalation so there’s no more risk for this procedure in hamsters than for other species. However, surgeries on such small animals are dangerous, since they could easily die as a result of hypothermia or a somewhat greater than usual blood loss.

On rare occasions, surgery may overly compromise the animal. This isn’t common, as the vast majority of tumors removed are close to the skin. In addition, you have to really consider whether it’s a good idea to have a one-year-old animal go through surgery when their life span is only two years.

Hamsters have a short life expectancy and tumors usually appear toward the end of their lives. It’s always hard to let go of a pet but often it’s best to let nature take its course. Only take action when the pet’s quality of life has significantly declined.

The Life Cycle of Hamsters
The average hamster lives a short life of approximately 3 years. Today, we'll take a look at the life cycle of hamsters - enjoy! Read more »
Link copied!
Interesting Articles
Hamsters and Rodents
How to Prevent Heat Stroke in Hamsters