Animals That Store Food: What's Behind This Behavior?

Surviving in the wild is a challenge for all animals, even for those at the top of the food chain. One strategy that animals use is storing food for the future. 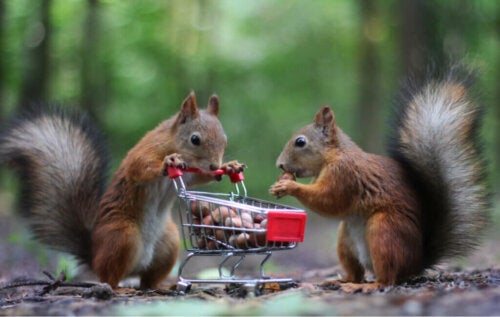 There are many animals that store food for times of need, such as winter, the breeding season, or droughts. To do this, they carefully hide food from other animals in all sorts of different places.

These animals usually feed on seeds or fruits, meaning they are herbivores. However, there are species with more varied, omnivorous diets. As surprising as it may seem, there are even some carnivores who are experts at storing food for later.

Why do animals need to gather food? We’ll explain it to you below.

In most cases, this storage behavior is a result of survival instincts. It’s a way of saving food when there’s a surplus to consume later when food is scarce. Typically, they store food in a makeshift “pantry” adapted to several factors:

In the animal kingdom, it’s important to differentiate between true food storage versus other behavior patterns. An animal in the wild is used to periods when food is scarce so they start gathering and storing resources.

However, domestic dogs will bury bones and toys without any real need. Why do they do this? Once again, it’s about survival instinct. Don’t forget that their ancestors didn’t have the luxury of people feeding them regularly. Storing food is burned into their DNA.

Good things come to those who wait

In most cases, the animal will try to create a ready-to-eat food reserve for an uncertain future. However, species are known to allow food to mature in their storage location. For example, animals will keep food that isn’t ripe yet, knowing that it will be edible after a while.

Examples of animals that store food

Most of the storage animals are rodents. For example, squirrels are very far-sighted when faced with possible future shortages. That’s why they hide nuts, hazelnuts, and seeds in different hiding places for when the cold arrives. The problem is that they often forget where their pantry is. The good thing about this mistake is that buried seeds or fruits later germinate and grow into trees.

However, there are also storage species among birds. This is the case of the shrike or butcher bird, which is known to hunt insects, birds, reptiles, or mammals and impale their bodies on thorny stems. This serves as food stores to feed their chicks without having to go hunting again.

Other ways animals prepare for times of scarcity

Animals do many different things to survive in the winter, in addition to storing food:

As we’ve seen, many animals have food storage techniques for harder times embedded in their genetic code. This strategy is about an exchange of energy since they invest their own energy in storing food in order to have plenty of food in more difficult times.

Gray Squirrels: Discover All Their Characteristics
You've probably seen gray squirrels in your yard, but what do you know about these animals? We'll tell you all about these forest creatures. Read more »
Link copied!
Interesting Articles
Homemade Recipes
A Good Meat Stew for Your Cat

Exotic Pets
Exotic Reptiles and Amphibians Can Cause Salmonella

A parrot's diet is one of the most important aspects to consider when keeping this bird as a pet. There are many foods forbidden to parrots that we must take…