Genetic Divergence Between Dogs and Wolves 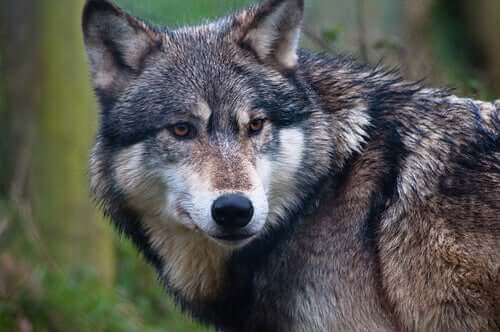 It’s long been common knowledge that dogs are descended from wolves. But to what extent is this actually true? Today, we want to tell you about the genetic divergence between dogs and wolves to help you understand how both species came to coexist.

Genetic divergence between dogs and wolves

Genetic divergence – the evolution of wolves

There’s evidence to suggest that the first wolves – which were very similar to the dogs we know today – have existed for around 800,000 years. However, habitat, environmental factors, predators, and other factors have since influenced their genetic make-up.

During the Pleistocene era, there was a species of giant wolf. Known as the Ambruster’s wolf, it lived in what is now North America. Like many other canids, they lived and hunted in packs. The canis dirus or dire wolf is one of the most famous species of prehistoric wolves.

It was smaller than the Ambruster’s wolf, with short legs that made it ill-suited to running long distances. However, they had another skill: their jaws were so strong that they were able to crush bone. Both species went extinct thousands of years ago.

Genetic divergence – the evolution of dogs

As we’ve already mentioned, experts believe with absolute certainty that dogs are the descendants of wolves. But how did this even happen? Let’s take a look. It’s believed that around 12,000 – 15,000 years ago, man domesticated the first wolf in China (although others claim that this had already happened prior to this point).

The first humans that inhabited China maintained a close relationship with a small species of wolf, which they still hadn’t domesticated. This was the first test of man’s ability to coexist with wolves.

Genetic divergence between dogs and wolves is not something that can be dated or traced with exact certainty. What we do know is how humans and wolves came to live together. Seemingly, both humans and wolves living at the time had very similar social and family lives. This united two species that were devoted to hunting and survival.

Humans soon recognized the similarities between themselves and wolves, and tried to look for ways they could work together to hunt down prey. The wolves were responsible for tracking down the prey, while humans would give them any leftovers they didn’t eat.

In this way, humans slowly began to domesticate wolves. Their naturally wild character was replaced by a more affectionate one, and they seemed happy to live alongside human beings. From there, people began to develop working dogs, which later became family pets.

Similarities between dogs and wolves

Despite the genetic divergence between dogs and wolves, there are still several similarities between them, such as:

As we’ve already mentioned, it’s impossible to know exactly how and when genetic divergence between dogs and wolves took place. However, there are a number of clues which help us to understand certain details, and deepen our understanding of these two fascinating species.

6 Wolf Breeds
Canis Lupus is a carnivorous mammal which dogs descend from. They're native to North America, Eurasia, and the Middle East, and currently their population has been reduced due to hunting and deforestation. Continue reading this article to find out about wolf breeds that are still alive today. Read more »
Link copied!
Interesting Articles
Birds
Lesser Kestrel, the Smallest of the Falcons