Differences between Gerbils and Guinea Pigs

Even though gerbils and Guinea pigs have a similar character and diet, they, in fact, diverge quite a bit in size and physiognomy. As for their behavior, this is mainly influenced by the possibilities of their physiques. 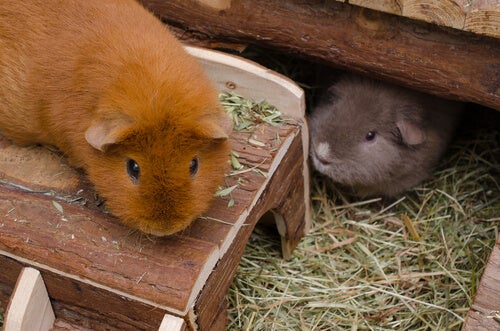 Gerbils and guinea pigs are great pets who’ve found a place in the hearts of many generations. However, those who’ve never kept these kinds of animals as pets don’t know the differences between one species and the other. So, continue reading to find out more about the individual characteristics of both rodents.

Similarities between gerbils and guinea pigs

As we said above, gerbils and guinea pigs are two species of rodents. There are many differences between them even though they belong to the same order and have a few things in common.

For example, both animals are herbivorous. That is, they feed only on vegetables, fruit, and cereals. However, they prefer to eat hay or raw, fresh vegetables. Animal products shouldn’t be a part of their diet, not even dairy and eggs.

These animals must have a cage in order for them to be content, even if you allow them to roam around your home. Their habitat, which doesn’t have to be a cage per se, must be well ventilated and mustn’t have low bars as these can do a lot of damage to their feet.

Of course, since they’re rodents, their teeth never stop growing so they need to chew things often in order to wear them down. There should always be gnawing objects such as wooden houses, hay, or cereal bars in their cages.

Differences in the size and body of gerbils and guinea pigs

The main differences between gerbils and guinea pigs are in their bodies. Their shapes and abilities are different because their needs are so.

For starters, guinea pigs are bigger than gerbils. Depending on the breed of guinea pigs, they can weigh from 2 to 5 pounds. Gerbils are much smaller, the largest ones weigh about 4.25 ounces.

The hind legs on both animals are stronger than the front ones, but the gerbils’ are much larger. In fact, they can stand up on their hind legs to pry around. Also, they can jump up and down on them if they need to.

Guinea pigs can’t jump though; if they have to flee, they do so with their four legs. They do a move referred to as popcorning but they mainly do it when they’re excited. They use all of their limbs for it.

Another striking difference is that guinea pigs don’t have a tail — not even a tiny one. On the contrary, gerbils have a tail that’s as long as their body. They often lose it due to accidents though.

There are also behavioral differences between gerbils and guinea pigs. In the wild, gerbils dig burrows and make tunnels, they try to do it in captivity as well.

Guinea pigs are calmer and easy going. They don’t make burrows or tunnels and are content with a small nest of their creation inside their home. One where they can take a nap without being disturbed.

In contrast, gerbils are much more active. They also sleep during the day and alternate waking periods with little naps, but they’re much more athletic and energetic than guinea pigs. Not only can they run by propelling themselves with their hind legs, but they can also take big leaps.

Guinea pigs grind their teeth when they’re upset, angry, or scared while gerbils kick the ground with their hind legs. Guinea pigs have a higher register of sounds than gerbils; many of which the human ears can’t even perceive.

These two animals are originally from different places. Even though both gerbils and guinea pigs are domestic animals, you can still find their wild relatives in many different countries.

Guinea pigs come from the South American jungles. The long-haired variety is actually referred to as the “Peruvian” breed. They live at ground level and have shallow burrows in which they start their families and colonies.

In contrast, gerbils come from the Asian desert. They’re used to living sandy and rocky areas where there are little vegetation and low humidity.

The differences between gerbils and guinea pigs are remarkable, both in their bodies and behavior. However, both have a docile tolerant character that has won the hearts of entire human generations. In short, they’re both wonderful pets.

Learn Some Fun Facts About Guinea Pigs!
In this article, we're going to tell you some great fun facts about guinea pigs, from where they get their name from, to how they communicate. Read on! Read more »
Link copied!
Interesting Articles
Hamsters and Rodents
Do Hamsters Hibernate?