Everything About the Guinea Pig's Pregnancy

These rodents often have complications during gestation and even at birth, as 20% of the mothers lose their lives. There’s a protocol to minimize these risks, as much as possible. 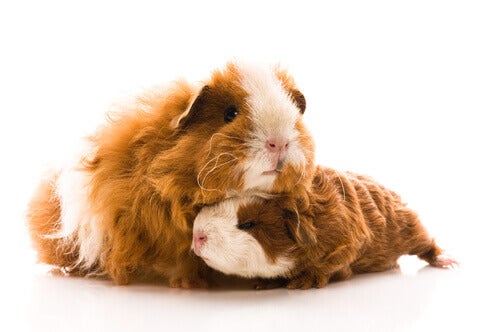 You’ve may have decided to adopt a litter of guinea pigs, and want to know how to take care of the mother the best you can. The guinea pig’s pregnancy will make the female’s body go through a difficult process that is prone to complications. In order to ensure that both the mother and the young are healthy, it’s essential to be aware of the changes undergone by this animal’s body.

Early stages of the guinea’s pig pregnancy and recommended diet

After fecundation, the signs of the guinea pig’s pregnancy will take a few days to appear. The simple fact that it stops mating with the male is already a sign that the process has been successful.

One of the problems that the guinea pig faces in its daily life is a deficit of vitamin C. Its body isn’t capable of synthesizing it correctly, so it needs an abundant amount of food rich in vitamin C. We must also take into account that a pregnant guinea pig needs triple the amount of vitamin C in its body in order to carry its pregnancy to term.

For this reason, you should replace its usual diet with alfalfa, rich in calcium and proteins, along with foods like kiwi, kale or green peppers. If you choose to supply your animal with vitamin C by dissolving it in water, try to change it often as it can easily turn bad.

The gestation period usually lasts about eight and a half to nine weeks. The average number of pups per litter is 3, but litters of up to 14 have been seen. Keep this in mind when deciding to start this process.

What to expect in the intermediate stages of pregnancy?

The most important thing for the mother is to feed herself in a balanced way. This implies that it must obtain the essential vitamins and minerals for the correct development of the offspring. You shouldn’t give it less food than it needs, nor overfeed it.

In the final weeks of gestation, your guinea pig will already have enough difficulties to move around and doesn’t need to have fat accumulated. Despite its pregnancy, the mother can exercise normally. It needs to keep in shape in order to prepare for the birth and its new litter.

The only thing you have to keep in mind is that you shouldn’t lift it off the floor, because this could endanger the offspring.

As weeks go by, the mother’s belly will become tighter and bulkier. There will come a time when you’ll be able to clearly see the babies moving inside the mother, and even the different parts of their anatomy.

By this time, your pet’s pelvic bones will have widened enough to make way for the pups during birth. Once they’ve reached a length of about two fingers, there’s little left for the litter to be born.

Try to provide a welcoming and stress-free environment for your pet during these final weeks. Your guinea pig will have time to prepare itself physically and mentally, and won’t run the risk of a miscarriage.

Guinea pigs usually give birth during the day. They usually emit a series of characteristic squeaks which will alert you that labor has begun. Approximately every five minutes, a new pup will be born. Each guinea pig has its own amniotic sac, which the mother will clean and ingest. If you notice any amniotic tissue stuck to a baby’s face, remove it as soon as possible.

The delivery shouldn’t take longer than 20 minutes. If it takes longer than this, it’ll probably require an emergency C-section, so try to have your vet as close as possible at this time, especially if your guinea pig is a new mother.

20% of guinea pig births end in the mother’s death. Giving birth isn’t an easy process for any animal species. If you think you don’t have the resources or knowledge to deal with a guinea pig’s pregnancy, we recommend that you don’t put your animal through this process.

Learn Some Fun Facts About Guinea Pigs!
In this article, we're going to tell you some great fun facts about guinea pigs, from where they get their name from, to how they communicate. Read on! Read more »
Link copied!
Interesting Articles
Hamsters and Rodents
What Causes Stress in Hamsters?