Differences between Hares and Rabbits

Despite their broad similarities, the truth is that these mammals differ not only in morphology, but also in behavior and character. And of course, one of the two makes a better pet than the other! 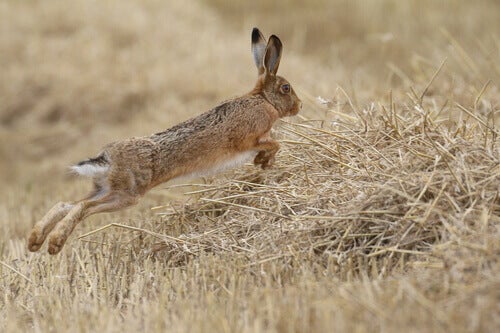 You may think they’re almost the same, but there are several differences between hares and rabbits. Would you like to know about them? In this article, you’ll learn about the characteristics of each species and how they differ.

Characteristics of hares and rabbits

With more than 30 species worldwide, hares are mammals of the Leporidae family that are characterized by their long ears, fast running speed and ability to reproduce continuously. In addition, their young can feed themselves from birth.

Rabbits belong to the same family but have a number of important differences. Their bodies are covered with thick woolly fur, they have incisor teeth which grow incessantly – they have to gnaw them down by eating solid food – and they usually live in pairs or alone within their famed and complex burrows.

Differences between hares and rabbits

To add to the summary above, the main differences between hares and rabbits are set out in more detail below:

To begin with, hares are larger than rabbits, and that also includes their ears and legs, which are longer. Hares’ extremities allow them to run long distances in a short time, while rabbits’ hind legs are used to ‘stamp’ on the ground if they’re angry or need to defend themselves.

Hares and rabbits face almost the same predators (mostly carnivores and birds of prey) but their actions in the face of danger are completely different. Hares flee at great speed, taking advantage of their long legs, in order to tire their adversary.

As for rabbits, they have two methods of getting around the danger: they can quickly dig a hole in the ground and hide, or they can remain still and go unnoticed.

The hare’s ‘pregnancy’ is longer than that of rabbits: 42 versus 30 days. Baby hares, called leverets, are completely developed at birth; they already have hair and open eyes. This is not the case with rabbit kittens, who are born unable to walk or regulate their temperature.

Even though both species live in burrows, the truth is that rabbits have greater skills as engineers, builders and architects. They dig underground compounds worthy of admiration, where they keep their young, protect themselves from danger, and sleep during the day.

In contrast, hares don’t go to as much effort; they construct only small mounds of earth where the females give birth to their young or rest.

Hares are quite solitary animals that only ‘gather’ when it’s time to mate or during the first days after the female gives birth. In contrast, rabbits usually live in ‘fluffles’ or colonies, with the number of individuals depending on the abundance of food. Each colony has a dominant male which must fight to achieve this distinction.

Rabbits are chosen as pets in many homes, due to their calm behavior, their small size, their tenderness and their docility. Even though hares could probably be domesticated, the truth is that their wild instincts are much stronger.

Also, it’s more difficult to get a hare from a pet store than a rabbit. In order to keep a hare at home, you’d need an expansive area that allows it to run at will. Whereas, if you choose a rabbit, there are dwarf species which adapt easily to terrariums or cages.

Finally, it’s important to note that hares and rabbits have very similar coats and eat similar foods. Both species have individuals of different colors and both feed on fruits, vegetables, leaves and plants.

How to Choose and Look After a Rabbit
Are you about to bring a rabbit home for the first time? If so, you’ll need to get your home ready for your new rabbit. Find out how... Read more »
Link copied!
Interesting Articles
Rabbits
All You Need to Know about Holland Lop Rabbits