There are about fifty subspecies of hare, even if only a few are the most representative of their morphology and behavior. Some survive the arctic cold, and others are capable of camouflaging themselves after shedding, by changing their fur to another color. 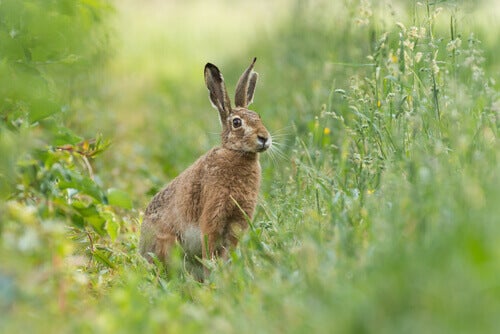 Different from rabbits in terms of speed, size and ear length –among other things– there are more than 40 species of hare around the world. Their main habitats include plains, steppes, forests, and mountains. In this article, we’ll tell you about some of the most representative ones.

How many species of hare are there?

Within the family Leporidae –which includes rabbits– we can find about 50 species of hare. Some of them, the best-known ones, or the ones we know more about, are:

Also known as the brown hare (see the photo at the beginning of this article) – it’s a mammal that lives all over Europe –except for Scandinavia–, certain parts of Asia, and has been introduced in South America, Australia, New Zealand, and the United States. This hare prefers open areas such as plains and plateaus.

The fur of the European hare is yellowish-brown, with a whitish belly and long ears with black tips. It hides in shallow burrows and usually blends in with the environment to avoid being hunted by wolves, foxes, wild cats, and birds of prey.

As its name indicates, its main habitat is California, United States, but it’s also found in Mexico. This hare is also called the black-tailed jackrabbit, and it prefers desert highlands.

This hare has a grayish fur with white spots around the eyes; its ears are very large and it has black spots on the tail. It weighs about 2 kilos (4 lb) and measures less than a meter (39 in) tall. Also, it feeds on vegetables.

The Arctic hare is one of the few in its family to have adapted to mountain and polar climates. Thus, it lives in Canada, Alaska, Greenland and Scandinavia, specifically in the tundra. Its coat is white as it’s close to the pole, but in summer it can have bluish tones.

It weighs about 5 kilos (11 lb) when it reaches adulthood, and measures a maximum of 70 centimeters (28 in). Furthermore, it feeds on small plants, sprouts, leaves and berries, which it detects with its great sense of smell. It can even find food under a big pile of snow!

Its scientific name is Lepus timidus and it inhabits mountainous and polar ecosystems, including Siberia, the Alps, Poland, Ireland, and the United Kingdom. During summer, it sheds its fur – going from white (its camouflage in the snow) to brown, to blend in with trees and plants.

Depending on where it lives, the mountain hare has a different diet: fallen tree branches, grasses, leaves, or fruit.

With its long hind legs it can move without any problems in the snow, and it doesn’t sink down into it. Furthermore, as it has a thick layer of fur, it doesn’t freeze even in the harshest of winters.

During winter, its fur becomes white for camouflaging purposes. However, when summer comes, it changes to grayish brown, and its ears have black tips. Also, it feeds on leaves, grasses, plants, tree bark, and ferns.

It’s an animal of nocturnal habits, doesn’t hibernate and can reproduce four times per year. Each litter has between two and four offspring.

This is another species of hare that lives in Asia, smaller than the European one. It’s 2 kilos in weight (4 lb) and 55 centimeters (22 in) in length. It lives in harsh ecosystems of up to 3,000 meters high, with little vegetation or food, in Russia, southern India, northeast Africa, and the Arabian deserts. In addition, it has the capacity to survive several days without water, like camels.

It’s worth emphasizing that there are two species of rodents considered among the hare species, but which don’t belong to this family: the Patagonian hare and the South African spring hare. Nevertheless, we mustn’t mix them up!

The Differences Between Rabbits and Hares
Many people mistakenly think that rabbits and hares are the same animal. In this article, we'll tell you about the differences between these two animals. Read more »
Link copied!
Interesting Articles
Mammals
Differences Between Asian and African Elephants