One of the most prominent features of an Arabian camel is its hump, which can store fat that it uses to nourish itself when food isn't accessible. 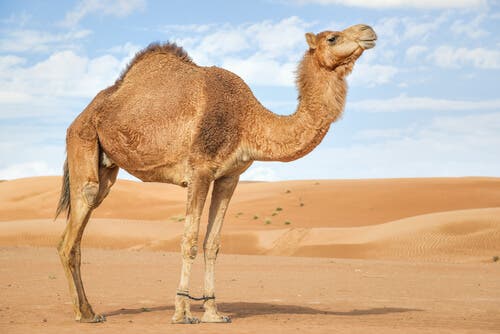 The Arabian camel (also known as a dromedary) is a mammal that attracts attention for its looks, its ability to survive days without drinking in the middle of the desert, and, of course, for its great hump. In this article, we’ll talk about this amazing animal’s characteristics, behavior, and habitat.

Features of an Arabian camel

Belonging to the Camelidae family, the Arabian camel has a single hump and a less robust body than its two-humped relative, the Bactrian camel.

Like the rest of its species, it has no horns. However, it does have oblique nostrils, a split upper lip to eat thorny plants, and long, thin legs with hooves.

This animal’s body shows us how possible it is to adapt to habitats as hostile as the desert. For instance, its knees and ankles have calluses to resist burning temperatures when sitting in the hot sand. In addition, its long eyelashes prevent sand from entering the eyes and it has a raised belly that avoids contact with the sand while standing.

In fact, every time its feet make contact with the sand, they expand in order to avoid sinking. With the arrival of spring, the Arabian camel sheds its hair and sweats only at temperatures above 105 °F. Its skin is very tough and can withstand the desert’s scorching sun.

Another of the most prominent features of the Arabian camel is its hump. Inside of it, it stores fat with which to nourish itself when food doesn’t abound. In addition, the accumulated fat also has the ability to become water and thus help it to avoid dehydration.

A dromedary can drink up to 150 liters of water in a very short time and then go weeks without drinking again. This is the reason they have been used by many nomadic tribes of the desert.

We should mention that the Arabian camel is a herbivorous animal and feeds on dates, tree leaves, and grains such as wheat and oats. However, when it’s traveling with an entourage through the desert, it can survive eating dried leaves, cacti, seeds, or spiny weeds.

This dromedary has been domesticated for 3500 years and is essential for a human’s life in the desert. They use them for loading objects, for transport and to drink from their milk. In fact, this milk is more nutritious and with lower fat percentages than cow’s milk.

As far as the Arabian camel’s behavior goes, we should note that it seems to always have a pleasant manner. It’s quite gentle and is also a very intelligent animal. Its calm pace while following the herd shouldn’t be interpreted as a lack of speed, as sometimes it can run very fast and even be used for racing.

Moreover, it isn’t an aggressive animal that would attack or bite a person. This, however, is the result of centuries of domestication. If you happen to be in front of a camel, don’t panic if it starts to roar or grunt (they’re actually strong breaths). It usually does this when it’s hot and it’s feeling uncomfortable, or because it would rather lie down than have to carry you!

As the name implies, the Arabic lands are this herbivore’s main habitat, although not the only one. It mainly lives in warm and hot desert areas including countries like Morocco, Egypt, Tunisia, Israel, Kazakhstan, and Mongolia. Arguably, they inhabit all of North Africa, the Middle East, and Eastern Asia.

Nevertheless, the Arabian camel has been introduced to other places such as the Canary Islands and Australia. In the latter, people from Great Britain used them to transport both people and goods.

Due to the invention of motor vehicles, these dromedaries were no longer needed. As a result, thousands of specimens were abandoned in the desert. The good news is that they gathered in groups, and today, the Australian wild dromedaries’ population is on the rise.

Have you ever seen a dromedary? What do you think of them? We hope you enjoyed learning more about these fantastic and amazing desert animals today. Until next time!

The Differences Between Camels and Dromedaries
Do camels have one or two humps? To answer that, you have to start by knowing the difference between camels and dromedaries. Read more »
Link copied!
Interesting Articles
Other Animals
The Strangest and Most Beautiful Animal Friendships

Other Animals
Some Amazing Species of Crustaceans

There are no fewer than 67,000 different species of crustaceans in total. Most of them are aquatic and live in…